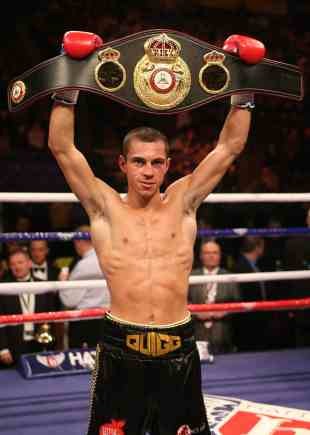 Quigg keeps the WBA title after draw with Salinas

Scott Quigg scored a majority draw against the Cuban slickster Yoandris Salinas in what turned out to be the first defence of his newly acquired WBA super-bantamweight title, with the new holder retaining at London’s 02 Arena in a fight of two halves.

Quigg, 24, allowed Salinas to go ahead during the first half of the fight and the Cuban was proving to be a worthy opponent for the challenge. Quigg always seemed in control of what he was doing, but Salinas took advantage of the pace and his jab was the key to his early lead.

In the second part of the fight it was Quigg who began to up his game and his combinations and nice choice of shot had Salinas having a re think and Quigg took over and finished strong to even up the score, although the Bury lad believed he had done enough overall to claim the win.

“I stuck to the game plan for five or six rounds. We knew we were going to be sharp early on and I couldn’t have gone how I did in the last five rounds like that from the start because I would have been picked off.

“We stuck to the plan. It felt like I was in control all the way through. Obviously I’m gutted that I didn’t get the win.

“I’ve just been in with a world class fighter. He had 300 odd amateur and I had 12. I belong at world level and I think I just proved that.”

Other results from the London o2

On his professional debut, Olympic gold medal winner Anthony Joshua, blew away the previously unbeaten Italian Emanuele Leo in the opening round to get his promising heavyweight career off to a flying start.

The always exciting Lightweight Kevin Mitchell had his first fight since losing his world title challenge to Ricky Burns, with a good performance to stop Mexican Marco Lopez in the 6th round. Mitchell has mentioned Liverpool’s Derry Mathews as a potential next opponent, what a fight that will be! Expect them both to clash before the end of the year.

Tony Conquest had to survive two early knockdowns, but went on to to win a ten round decision over Wadi Camacho in a great British cruiserweight title eliminator fight.

Tony Owen dropped Danny Connor in the ninth round and went on to gain a ten round points decision in their Southern Area junior welterweight title fight.

Light-middleweight prospect Matthew Ryan lost his unbeaten record when he was outpointed by George Michael Carman over a tight six round contest that could have gone either way.

Cruiserweight debutant Ben Ileyemi stopped Stanislavs Makarenko in the second round after dropping him in the first.