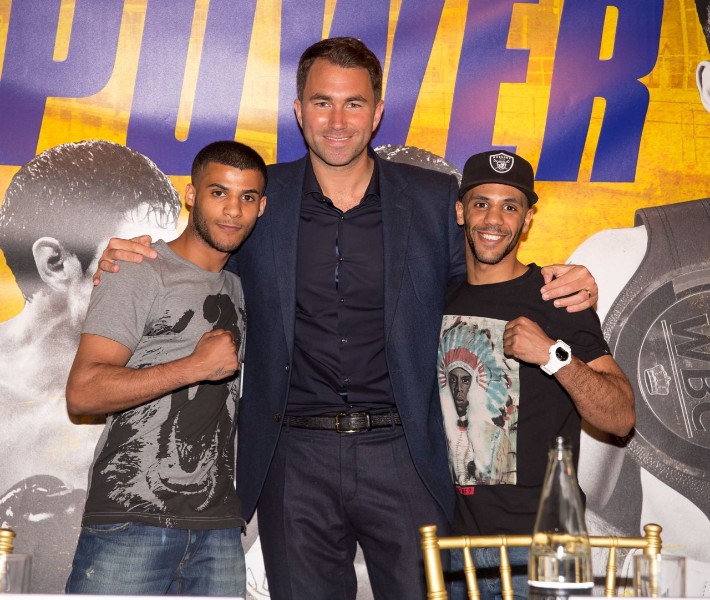 Kal Yafai will face Yaqub Kareem for the vacant Commonwealth Super Flyweight title on Wednesday May 21 at the First Direct Arena in Leeds, live on Sky Sports – with younger brother Gamal Yafai making his professional debut on the bill.

Yafai fights for his first pro title on the bill against the former champion from Nigeria, who won the belt in 2011 and came to England last April to defend it against Paul Butler. Yafai returned to action in October after a period out of the ring with an injured bicep, and claimed his seventh win inside the distance from ten pro contests in December – with his move into double figures in the paid ranks convincing the 24 year old that he was ready to chase his first honours as a pro.

“I’m very excited to fight for my first title,” said Yafai. “I’m no longer a prospect and I believe I am ready for the big titles, starting with the Commonwealth. Kareem has held the belt before and I know that it will be a tough fight, but I am confident of getting a win in style and building on that later in the year.”

Younger brother Gamal will begin life as a pro in the Super Bantamweight division, and brings with him great amateur pedigree. The 22 year old joined the GB development team at 16, won the ABAs at 17 and was promoted to the Team GB podium squad at 18 – and now he’s ready to make waves in the paid ranks.

“I have wanted to go pro for a long time and I cannot wait to get out there in the pros and show what I have got,” said Yafai, whose appearance is subject to the approval of his license from the British Boxing Board of Control. “It’s great to be making my debut on a brilliant bill like this and it’s going to be a special night for the family.”

Promoter Eddie Hearn says that this show kicks off a new era of big time boxing in Leeds, and with Gamal added to brother Kal in the Matchroom Boxing stable, he expects to make a similar move in their hometown of Birmingham later this year.

“I’m so excited to add Gamal to our roster of young British stars,” said Hearn. “Those who have seen him in action know that he’s a powerful and aggressive fighter and that’s the kind of boxer that fans want to see.

“Kal is ready to start stepping up into title fights now and if he can get his hands on the Commonwealth crown on May 21 in Leeds, I think we will have the chance to put on some special nights in Birmingham with these two boys.”

Josh Warrington defends his Commonwealth Featherweight title against Martin Lindsay in his hometown fresh from his win over Rendall Munroe in Manchester on April 19, and the 23 year old is delighted to be back in the ring so quickly in another big test.

“I’ve still got some Easter eggs at home I haven’t touched!” said Warrington. “I’ve been patient in my career so far so I am not going to turn down fights when they come along and this is a big fight for me.

“If I keep winning and beating good names, then I can really look to doing big things in Leeds, but I am not looking past Martin as I know that he’s a top class operator.”

Liverpool’s Stephen Smith has a huge fight on the bill against Fernando David Saucedo for the WBC Silver Super Featherweight title in a crunch eliminator clash, and after the fight was postponed from its scheduled March 15 date on Merseyside, Smith is chomping at the bit to finally face his foe.

“It’s been a lifetime coming for me,” said Smith. “I’ve watched so much of him that I’m sick of the sight of him to be honest, but I feel I am so ready for this now and I feel that a great performance puts me right on track for a World title shot.”

“It’s a massive night for all the fighters on the card,” said Hearn. “Josh has stepped up to the plate in his last two fights and does so again. Martin is a top, top Featherweight and a win over him will be a huge moment for Josh.

“Stephen has worked his socks off to get to this position and he can smell that World title fight. Saucedo is going to be Stephen’s toughest fight to date, he’s a canny operator with bags of experience and no shortage of ability, but I believe Stephen will do the business and move that step closer to his dream.”