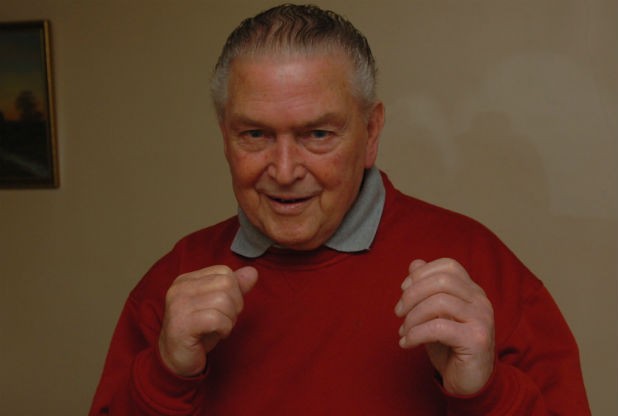 Tributes have been paid to a Llanelli sporting legend who has died.

Gareth Howells, who was 87, was a founder member of Trostre Amateur Boxing Club and was coach/trainer there for over 70 years.

In 2008 Mr Howells, of Maes Road, Llangennech, received an MBE in the New Year’s Honours list.

Over the years he set up more than 11 gyms in the town. Generations of boxers benefited from his wisdom and training.

Club secretary Del Phillips said: “I have known Gareth for more than 45 years. His passion for the sport of boxing was totally undiminished during that time. At the age of 87 he was still in the gym until a fortnight before his passing.

“Back in 1939 as a shy 14-year-old, Gareth began training in his uncle Jack’s garden shed. It was in this most basic of gym’s, no more than eight foot by six foot and with makeshift weights, that Gareth started on a path that was to shape his sporting destiny.

“By the age of 16 after studying all the reference books that he could lay his hands on he started to train others in the noble art of boxing.

“In the years that followed under Gareth’s guidance Trostre ABC has developed a multitude of Welsh amateur boxing champions, even producing Welsh champions earlier this year.”

Mr Phillips said the club would continue as a tribute to Mr Howells.

“This is truly the end of an era for Trostre ABC but the committee are united in their resolve to keep the boxing club going as a tribute to the 70 plus years that Gareth spent teaching others his inimitable style of boxing,” he added.

“He will be sadly missed. The boxing fraternity throughout Wales send their deepest condolences to the family.”