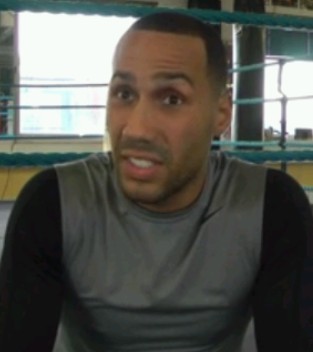 Video: James DeGale talks about his next fight on March 1st

WBC Silver super middleweight champion James DeGale is back in action on March 1st against undefeated Gevrog Khatchikian on March 1st at the City Academy in Bristol.

Here the 2008 Beijing Olympic Gold Medallist talks about topping the bill in Bristol and his latest opponent.

James DeGale MBE vows undefeated Khatchikian is “in big trouble” when they clash in a fight that will also shown live on Channel 5.

The WBC Silver super middleweight champion, DeGale, defends his title against the former IBO Youth champion and is promising “an aggressive” performance when they meet in the ring.

“I’ve heard Bristol people are passionate about their boxing, they’ve had a couple of good fighters over the years, so it should be good, I’m looking forward to it,” the 2008 Olympic champion, DeGale, said.

“You’re going to see a lot more power, a lot more spite – an aggressive me and you’ll see a good finish – he’s (Khatchikian) in trouble, trust me.”

With that contest in the private negotiation period and likely to be decided by purse bids on March 14th, DeGale headlines a packed show in Bristol that includes British bantamweight champion Lee Haskins and young heavyweight sensation Hughie Lewis Fury.

But Khatchikian will be looking to crash James’ plans of becoming Great Britain’s first Olympic and professional world champion.

The Netherlands man is in great shape and has had plenty of notice for the fight, but was contracted to take part in a routine six round contest last Saturday night.

Having successfully come through the fight and improving his record to 20-0, the former IBO Youth champion knows that victory over DeGale in Bristol will catapult him into the world mix and towards his own ambitions.

However, the man fondly known as ‘Chunky’, James, is adamant he isn’t overlooking his latest opponent and is raring to give an emphatic performance.

“I’ve had a look at him on Youtube and he’s tough, he’s game, he likes to have a fight, he’s kind of fast – but the way I’m feeling now, I’m going to look to put on a wicked performance and prove that I am world class and I’m ready to box for the world title and win the world title.”