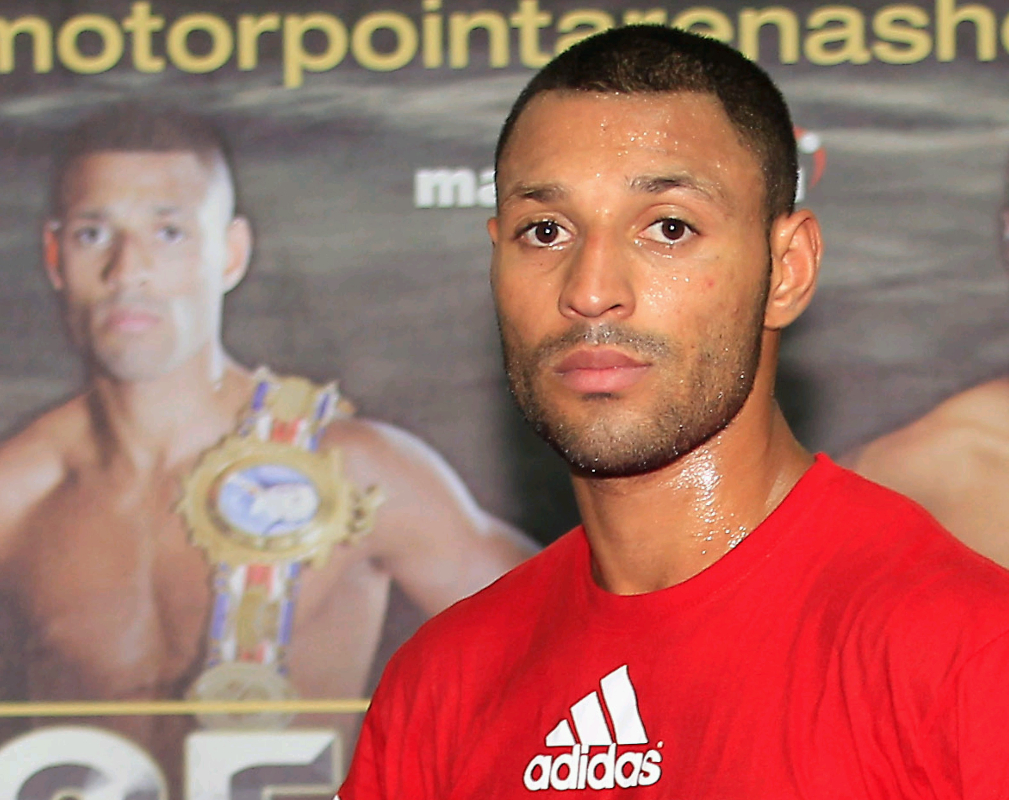 IBF world welterweight champion Kell Brook is expected to make his ring return in February 2015. The Sheffield boxers career was put on hold recently while he recovered from life threatening machete wounds to his leg after being attacked last month while on holidaying in Tenerife with his family to celebrate his world title win over Shawn Porter in August.

“I’ve just started back in the gym and I’m doing physio every other day,” Brook told ESPN. “We’re getting there now. The doctors have told me that once I get back from rehab I’ll be brand new, as good as ever. I’m thinking we will be ready to go for late February next year where we jump back in the ring and defend my world title.”

Carl Froch has revealed he is close to securing the fight he wants against Mexican Julio Ceasar Chavez in Las Vegas. “I’ve said before if I can’t fight in Vegas I’ll probably call it a day.” Froch told ITV. “It has to be big, and Chavez Jnr is that man, and I have had a good chat with my promoter this morning and we are making good progress with that fight and hopefully we’ll have an announcement soon”

Lightweight Kevin Mitchell is hoping for a possible return on the Tony Bellew/Nathan Cleverly card in Liverpool on November 22nd, before a domestic showdown with Anthony Crolla next year.

Bellew sure the sacrifices will be worth it

Liverpool’s Tony Bellew has told of his “heartbreak” at being away from his children while he prepares for his rematch with Nathan Cleverly at cruiserweight on November 22, at the Echo Arena.

“The first thing they said is ‘when are you coming home dad, we miss you.” Bellew told SkySports. “It’s heartbreaking at times, but not as heartbreaking as losing. This fight is a must-win fight. I will do it at any expense, whatever it takes. I’ll spend a year away if need be. I have to win this fight.”

Bellew is hoping to avenge his 2011 points defeat to Cleverly when he lost to the Cefn Fforest man when challenging for his WBO light-heavyweight title. Both boxers have since moved up a weight division and have been on collision course ever since.

James DeGale will be fighting at Wembley soon be it against Carl Froch or not, according to his Promoter Eddie Hearn.

DeGale who takes on Mexican Marco Antonio Periban on the Cleverly-Bellew rematch at the Echo Arena in Liverpool on Saturday November 22, is the mandatory challenger for the IBF super-middleweight title, held by Froch, but the 2008 Olympic champion first faces a tough task in former WBC world title challenger Periban if he comes through Hearn has dates set aside for the Londoner.

“There is a great chance that James DeGale will be fighting at Wembley next summer.” said Hearn. There’s two dates available, June 27 and on the week after. If Froch doesn’t fight DeGale because he vacates the belt and DeGale wins a world title then he could fight at Wembley. If DeGale does fight Froch and beats him then he could also fight at Wembley.”

Ahmet Patterson will defend his English welterweight strap against Glenn Foot in a fight that will also double as a British title eliminator. Patterson won the English title after stopping Chad Gaynor in round five last month in Sheffield. Purse bids have been put out for the fight between these two unbeaten talents and the contest must take place before January with a venue TBC.

Darlington’s Stuart Hall looks to become a two-time world champion on October 25th in Monte Carlo, when he takes on big-hitting American Randy Caballero for his vacant old belt, the IBF bantamweight he lost via split-decision reverse to Ellesmere Port’s Paul Butler in June.

However with Butler has since vacated the strap, leaving Hall with the opportunity to face Caballero for it. It will be an even playing field for both men fighting in neutral territory and Hall is expecting a war in France.

“I’ve watched him a couple of times, and he’s decent.” said Hall commenting on his American opponent. “But I’ve got 12 rounds to deal with him. I won’t watch him anymore. You can read too much into records. He’s won 21 and he’s going to have a punch, but I can take a punch. Sergio Perales had a punch and I took that. Vusi Malinga had a punch and I took that. There’s no way in the world he’d stop me. It’s going to be a cracking fight. It’s going to be a war, and I’ve been in them before, I don’t think he has.” Randy Caballero thinks he’s in for an easy night but after the first round he’ll know he’s in for a hard, hard night.”

Chris Eubank Jr. will take on Wolverhampton’s Jez Wilson at the Echo Arena in his next fight on October 25th. The undefeated Brighton prospect is already set-up to face on British, European and Commonwealth champion Billy Joe Saunders on November 29th at the ExCel Arena in London. The tough Wilson has lost 2 fights out of 14 and last time out took John Ryder 9 rounds in April. During that fight he suffered a broken jaw and again looks to have his work cut out with the rampant Eubank, but the Midlander wont be shifted easily and could push Eubank a few rounds.

Glasgow fight figure Tommy Gilmour has been honoured by the Boxing Writers’ Club with the Joe Bromley Award for his services to the sport. He follows in the footsteps of Scottish ring legends Ken Buchanan and Jim Watt but is the first non-boxer from Scotland to win the award.

The man who took over the St Andrews Sporting Club 27-years ago and recently handed over the reigns to take up a presidential role with the 41-year-old institution was happy to receive the accolade at the annual awards dinner at London’s Savoy Hotel. “I’m really chuffed to have been honoured in this way by such a prestigious body.” said Gilmour. “It means a lot to be the first non-boxer from Scotland to win the award.”

Amateur Boxer Of The Year

Scotland’s 2014 Commonwealth Gold Medalist Josh Taylor has been named Amateur Boxer Of The Year by the Boxing Writer’s Club Of Great Britain. Josh becomes the first Scottish boxer to win the award.