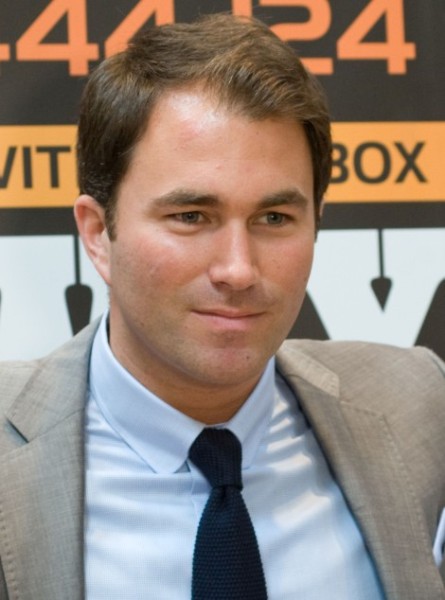 Hearn says Froch-Groves II is a London Fight, Wembley and Emirates frontrunners for May 31

Matchroom boxing promoter Eddie Hearn believes that Carl Froch vs George Groves II, will be the biggest British fight of all time and says he wants to stage it in London, with Arsenal’s Emirates Stadium and the home the England football team Wembley, the front runners to host the May 31 rematch.

Hearn writing in his Daily Mail column says he has some difficult logistical challenges to overcome first before the fight venue can be confirmed. The Manchester Arena where their first meeting was staged in November last year is was earmarked as is Old Trafford (Manchester United’s ground) and Nottingham Forest’s football ground (Froch’s choice) but Hearn is convinced that the return meeting should be in London.

Eddie Hearn: ‘Froch vs Groves II is a London fight.’

In the first fight, Froch stopped Groves in 9th round after coming back from a knockdown in the opener and trailing on points. The stoppage though was deemed premature by most and the rematch was demanded. The IBF made Groves the mandatory challenger again for their belt and Hearn says Froch turned down other offers to give the public what they want and to settle the score with Groves.

“I can reveal here that my two frontrunners for the venue on May 31 are the Emirates Stadium and Wembley.” revealed Hearn.

“People have suggested that I have ruled out Wembley because England will have a football match there against Peru on May 30. That’s not true.

“It is a massive logistical challenge to stage a fight of this magnitude just a day later but I am doing everything I can to make sure I have the best options available. That includes Wembley.

“We are also looking at Old Trafford and the City Ground in Nottingham, but my heart says this is a London fight. This is a statement fight, a fight that will show where boxing stands.

“For me, I want nothing less than the challenge of getting a massive stadium and filling it because I think this fight merits that. As part of making that statement, I think it doesn’t get much bigger than Wembley.

“The Emirates would be superb as well. I was there at the weekend to watch Arsenal beat Liverpool and the facilities are outstanding. Like anything in boxing, we have to crunch the numbers and see what offers the best value, but, like I said, I do not want to undersell this fight. I believe we can fill a huge arena.

“Some people in the industry tell me this is a fight for 60,000 people. That would be perfect for the Emirates. But I do think we can do 80,000 people. More than 20,000 people have already signed up to our ticket alert site and I think we could sell 40,000 tickets in a day. That is also why, as much as Carl would love to fight in Nottingham, I want to look at bigger venues.

“Arsenal would love to stage it. They staged Muhammad Ali-Henry Cooper at Highbury in 1966 and one of their directors, Ken Friar, was telling me how much they want to be involved. It’s going to be a special night.

“I can also reveal here the depth of the hate between Carl and George. I became aware a few weeks back, while George was making his appeals to the IBF, that they had started sending direct messages to each other on Twitter!

“George was accusing Carl of ducking him, Carl was biting back and saying he was going to knock him out. They must have sent 12 messages each, George goading Carl and Carl responding.

“It’s that animosity that has made this the single most challenging promotion I have ever been involved with.

“There is so much genuine hatred there that every point of negotiation has been a battle. Neither man wanted to give up anything. It got to the point where, among a bunch of other things, they were arguing over what seats their guests would have at ringside and no-one wanted to back down.

“Thankfully we got there in the end. George has worked tirelessly to force this fight and Carl appreciates what the public wants. He has never ducked a fight in his life and after some of the things that were said following the last one I think he feels he has a few scores to settle.

“It has bothered him, some of the stick he has taken from the public, because Carl has spent his career proving he is one of the great warriors in the history of the sport.

“Now he is going in with some real purpose. That makes him an extremely dangerous man fighting an extremely talented young fighter who is convinced he can win. I am so excited.

“This fight is huge and whichever stadium we end up in will reflect that. Imagine the build up, the anticipation and that epic night with the biggest crowd in post-war boxing history as both of these great fighters put it all on the line. It’s making the hairs on my neck stand up just talking about it.”