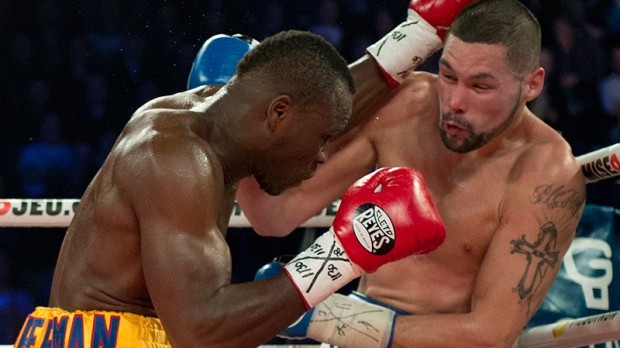 Tony ‘Bomber’ Bellew failed in his bid to win the WBC light-heavyweight title when he was stopped in the 6th round by the Canadian holder Adonis ‘Superman’ Stevenson in Quebec on Saturday night. It was the first time Bellew had been stopped in his 23-fight career.

Champion Stevenson, 36, retained his belt at 1:50 of the round with a clinical finish, but up to then the Liverpool challenger was giving it a good go and causing Stevenson trouble with his good movement and toughness.

Bellew started bright, he landed a good right hand in the first round and was doing well catching Stevenson coming in. In the second round Bellew landed a nice left hook, but he also had to take the same punch back from the champion, and it carried more hurt in it than Bombers, but Bellew countered with a nice right. The fight was on tenter hooks and the Liverpool lad was doing alright in the lions den! Roared on by his travelling supporters who had made the long journey over, they did him proud.

Bellew had bloodied Stevenson’s nose early in the third, but it was here where Stevenson began to time and land the quick straight right, that was to be the telling shot of the fight. Bellew’s head was being worryingly knocked back. At one point Bellew found himself trapped in the corner and Stevenson unloaded.. And Bellew felt it.

Stevenson’s southpaw style was giving Bellew problems and it seemed at times he couldn’t get out of the road of that left back hand, it was knocking his head back more frequently.

In the fourth, Stevenson’s lead was in evidence again, but Bellew responded and looked to have dropped the champion with a cuffing left around the lughole, but referee Michael Griffin ruled that it was a slip.. No slip there, it looked like Bellew had landed and it did knock Stevenson off balance! But it would have been to no avail now in hindsight! Bellew himself felt it was legitimate, because he went after Stevenson when the fight resumed.

The punches were being thrown with force by both, each risking the distance to land the telling finisher, both locked in battle, the sweat spraying off the Gladiators who glistened under the bright lights has the temperature soared and the fight exploded.

The fifth round was hard slogs. Bellew continued to dig in, but he was looking bothered by the shots, like he wasn’t anticipating the impact and each one was stinging and shaking his senses. He was happy to take a breather after putting alot of work into the previuos session and fought on the retreat, looking to counter the champion. A good few got through from Bellew, two nice hooks from him got Stevenson’s attention, but ‘Superman’ was looking stronger and there was a spring in his step. He was now the hunter and Bellew was being cornered, it was beginning to look like a tricky situation now for Bellew and you felt something left him as we entered the 6th.

In the finishing round Stevenson caught Bellew with a right to the body followed by another of those accurate straight lead lefts, which this time sent the Brit to the canvas. The Liverpudlian rose to his feet, he looked more tired and drained of energy than hurt. And has he regained his soles on the soft spring of the canvas and took the refs count, it was the beginning of the end for Bellew. Stevenson sensed his moment and like a champion grasped it! Hungry to defend his crown and his status, he ended proceedings with a double left lead again, they sliced across the unprotected jaw of a badly wobbled Bellew and the referee stopped the fight at the right time.

Bellew gave it his best and put up a good challenge, he ended the fight on his feet, against a champion who has been knocking foes out left, right and centre in chilling lights out style.. No sympathy to Bellew I’m sure, but he is a determined character and after a break, he may feel he has no other option but to give himself one more push and to try and get a third world title chance. He has spoken in the aftermath of this loss about moving up-to cruiserweight, watch this space. Whatever he decides to do we wish him all the best and commend him on a spirited effort against a handy champion.

“I’d like to apologise to everyone for not doing what I said I would do! I gave it everything and the better man won and that’s it. Gutted..” Bellew told his followers on Twitter.

“The fans who travelled, ill be forever in your debt I’m truly shocked.. Like I said the better man won, no excuses. Thanks again for support.”

Stevenson improved his record to 23 wins – including 20 knockouts – with just the one defeat and he is now targeting a fight with England’s Carl Froch or American veteran Bernard Hopkins, rather than a unification showdown with unbeaten Russian Sergey Kovalev.

“The fans of Quebec City want Carl Froch or Bernard Hopkins,” said Stevenson following his victory. “Kovalev is a good fighter too.

“I don’t have a problem with Kovalev, right now but the fans of Quebec City want Carl Froch and Bernard Hopkins. That’s what the fans want.”