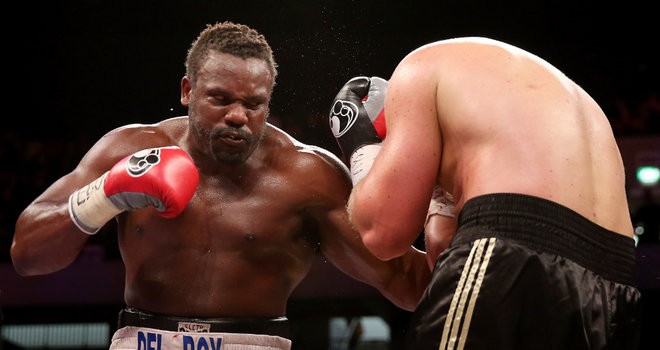 Chisora stops Pala and will fight again in early 2014

It was a good live test for the new slimmer Dereck Chisora on Saturday night at the Copper Box Arena in London.  He stopped Czech hard-case Ondrej Pala who had previously knocked out 22 opponents in 32 wins and had lost just 3 times, prior to this mauling.

Only two months ago Del Boy was at the same arena winning the European heavyweight title against Edmund Gerber, (TKO 5) busy times for the former British champion and world title challenger and he will be out again in early 2014 with another fight planned at the Copper Box on Saturday 8th February.

Chisora seemed in control of his work against Pala, but did have to ship some heavy shots himself during an entertaining dust up, particulally the left hook from the Czech, which crashed off Del’s jaw line a couple of times and at one stage in the second session, had the Londoner back peddling, to avoid a follow up shot while he cleared his head.

Chisora though looked the more dangerous and for what he took from Pala, he was giving back with interest and after shaking his opponent in the third, Chisora went in for the finish.

Pala was tough and tried to fight his way out of harm, but a couple of meaty uppercuts inside had his legs stiffening. Chisora who had his back to the ropes in the corner, threw another combination and slipped out, while an unsteady Pala stumbled into the corner, nice move from Del Boy and it looked like Pala had turned his back on the action and the referee waved the fight off.

The victory, Chisora’s fourth stoppage of the year which takes his record to 19 wins in 23 fights, 13KOs. Afterwards he paid tribute to his opponents toughness and added he now wants bigger tests and an eventual second shot at the world title.

“Fair play to the guy. He hit me with some good shots, but he didn’t hurt me,” Chisora said.

“I want a big opponent, someone who can test me, and that’s what we’re pushing for now.

“It’s all about getting into the right position to fight for those titles. I’ve just got to keep fighting and keep winning.”

The win caps a fantastic year for the Finchley ace who’s won all four fights by KO and is in a great position to start 2014 as he looks to get his second shot at a world title.  In his first attempt in February 2012 he pushed the WBC World Champion Vitali Klitschko the distance and giving him his hardest fight since Lennox Lewis nearly a decade earlier.

British Champion David Price is obligated to face Chisora on February 8th at the Copper Box Arena, as per the terms of the purse bid won by promoter Frank Warren, if Price withdraws from the fight then Chisora hopes he can entice rival Tyson Fury into the opposite corner next to avenge his July 2011 points loss.

“I’m happy with the win against Pala and now I’m focused on finally becoming world champion next year and bringing the world title back to Britain,”

“Pala gave it a good go and did land some shots early on, but remember he was the third replacement opponent and then when I turned on the power in the third round I got him out of there.  I’m pleased with the performance but there is still plenty of room for improvement,”

“I started they year without a boxing license and through hard work and determination I’ve ended the year as the European, WBO Intercontinental and WBA International champion and now I’m in pole position for a world title shot next year,”

“I’ve got myself into fantastic condition and I’m doing the business in the ring, now it’s all steam ahead for the world title.  I don’t care who’s in the opposite corner on February 8th, it can be David Price or Tyson Fury, I want that world title and if either of them are in my way they are getting knocked out.”

Also expected to feature on the next multi-title Copper Box Arena show will be Enfield super-middleweight star Frank Buglioni, who captured his first professional title on Saturday night when he destroyed Stepan Horvath with a devastating body shot in the eighth round, plus British and Commonwealth Middleweight Champion Billy Joe Saunders and newly crowned English Welterweight Champion Bradley Skeete.  An action-packed undercard with the best up-and-coming talent will also feature.