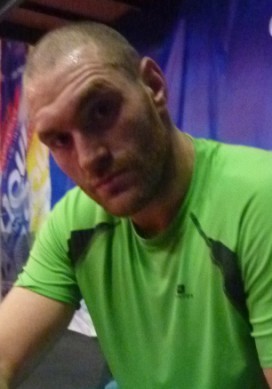 British BoxersJanuary 19, 2014
iFilmLondonTyson Fury0 Comments4 min read
video press conference – by iFLTV
Promoter Frank Warren announced recently that he has agreed a deal with Tyson Fury’s team, represented by Mick Hennessy, for the undefeated heavyweight sensation to fight on the multi-title Copper Box Arena show on Saturday 15th February, live and exclusive on BoxNation (Sky Ch. 437/Virgin Ch. 546).
Fury will feature in an International Heavyweight contest against an opponent to be confirmed, while his big rival Dereck Chisora headlines the action-packed card defending his European Heavyweight title against undefeated and hard-hitting Ukrainian Andriy Rudenko.If both men emerge victorious at the Copper Box Arena in their fights then it will set up a deal between the two camps for a joint promotion for the long awaited rematch between the two big men – Fury defeated Chisora on points in July 2011 to take his British and Commonwealth belts and undefeated record – that Warren says could happen in June at a football stadium in a huge summer showdown.

Warren said, “I’m delighted that Tyson and Mick are working with us and he’ll have his first fight on the Copper Box Arena show on Saturday 15th February. The plan is for both of them to come through their fights on the night and then the pair will meet in a massive rematch in June. Because it’s the biggest fight out there for them and it’s a fight that the public want to see the only place for it to happen would be a football stadium, a real summer extravaganza between the big men of British boxing before the World Cup. Tyson beat Dereck a few years ago and since then both of them have come on. Tyson has done fantastic, winning both here and abroad, and has marked himself as one of the world’s most exciting heavyweights. Dereck’s performances have been spot on recently, his weight is right and so his attitude and focus and he’s a real handful for any heavyweight out there. I’m already excited by it, Chisora versus Fury is the biggest fight out there and it could certainly be a world title eliminator. But plans can be upset though. Chisora has a by no means easy fight against a hard and undefeated Ukrainian in Rudenko who’s knocked out 16 of 24 opponents.”

The 19-year-old heavyweight has excited the boxing world with his devastating performances since turning professional last March and has blazed his way through 12 opponents, stopping seven early, inside a year.

Warren added, “Joining Tyson on the card is his cousin Hughie who is a top prospect in his own right. He’s certainly not hanging about as you can from his twelve fight in under year which shows that he’s focused and dedicated to the sport. I named him as one of my picks for this year and he’s an exciting hard-hitting talent who will thrill the fans with his performance.”

Also confirmed for the Copper Box Arena show is WBO European Super-Middleweight Champion Frank Buglioni’s challenger. The unbeaten London sensation, who captured the title last November with a crippling one punch body shot against Stepan Horvath, will make the first defence of his belt against the experienced former Italian champion Gaetano Nespro.

Penge welterweight Bradley Skeete steps up to the biggest challenge of his career when he meets former WBA World Welterweight Champion Vivian Harrison. Skeete won the English title last November defeating the tough former European Champion Colin Lynes, but will now be really tested by the rock-hard Guyana born, New York based, fighter who’s faced a who’s who of boxing. The Vacant WBA Intercontinental title is expected to be contested for and is subject to confirmation from the WBA.

Finally, Romford ace Tony Conquest will challenge for the Commonwealth Cruiserweight Championship against Australian Daniel Ammann on the card. Conquest has come back from his loss to Neil Dawson in December 2012 with two wins, a first round stoppage of David Vincena and defeating Wadi Camacho – despite being dropped in the first two rounds – to win on points.