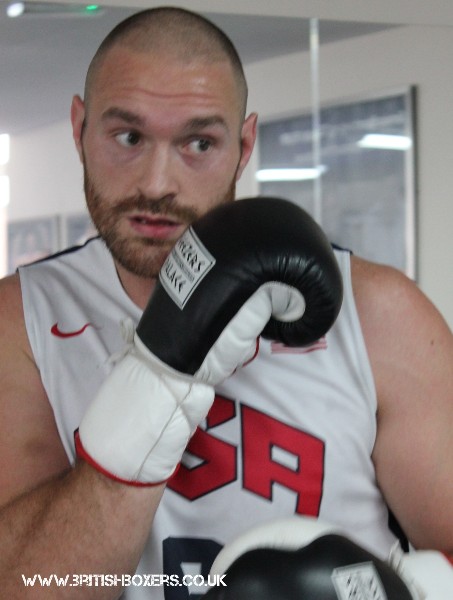 Tyson Fury is so confident he will ‘wipe out’ Wladimir Klitschko when he challenges the world heavyweight champion in Germany on October 24, that he has promised to walk away from boxing if he doesn’t!

“If I can’t beat a 40-year-old man, I need banning from boxing. If I can’t, then I won’t be boxing on because I won’t be able to achieve and get my goals.

“He’s been a great champion but [has] not fought anyone of note. That’s where I come in to it. Every 10, 15 or 20 years there’s a man who comes along and wipes everyone out. We’re in a bad era of heavyweights but I tell you what I’m looking forward to – going in there and writing this fellow off.

“I don’t like him, for one. I don’t think he’s an ambassador and has ruined the heavyweight division. People say he’s a great champion, clean-shaved, un-tattooed, great manners, very educated. So what? He’s boring and has ruined the division as far as I’m concerned. He’s got as much personality as the wall I’m looking at in front of me.”

“It’s not going to be a points decision in Germany as we all know. You’re not going to beat a Super champion in his own country on points, so I need a knockout to get a victory. It’s not a problem for me.

“He thinks he’s perfected his style with his long reach and his jab-and-grab style but he’s never fought anyone like me. I’m a 6ft 9in man who can move and throw different shapes around the ring. He’s fought big men who can’t move and small men who are small and can’t get to him.