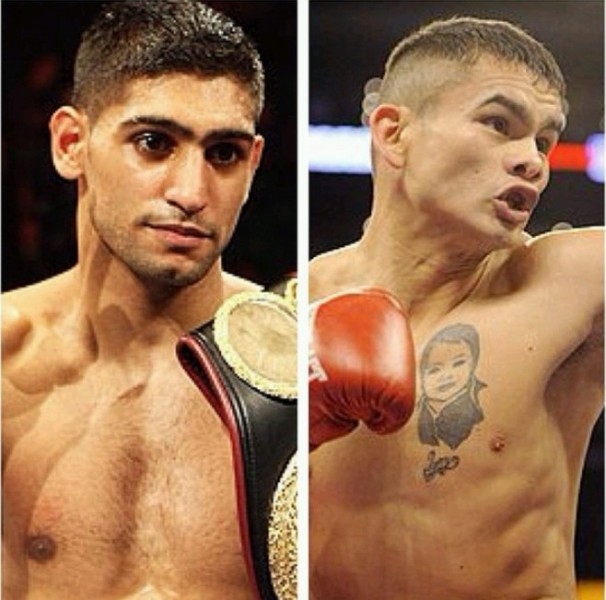 Amir Khan on alert as Floyd Mayweather asks Fans, Who Next?

The World No1 pound for pound boxer Floyd Mayweather Jr is taking matters out of his own hands and has asked fans on Twitter to decide who they think he should fight next? Mayweather posted the above pic on Instagram. There isn’t a big selection of opponents on the short list he has given us to mull over, in-fact there are just two options it seems the unbeaten Mayweather is considering and the good news for British fight fans is that our boy Amir Khan is on it!

Mayweather urged his followers to vote on whether he should face Khan or Marcos Maidana in his next fight. “I’m going to let the fans vote. Tell me who I should fight next. Khan or Maidana?” Mayweather wrote. Vote here!

Mayweather Jr, 36, who has won all of his 45 professional fights and doesn’t look like giving up his mantle just yet. He  has until now kept quiet as to who he will take on next, although Khan recently revealed he had signed a contract in December to face Mayweather in May, but that isn’t yet a nailed on deal.

The fight the fans have always wanted to see Mayweather in was against Manny Pacquiao although that fight seems increasingly unlikely as it always as been after talks between the two camps about a potential $300 million clash appeared to break down again.

Bolton based Khan who is now trained in America by Virgil Hunter has been holding out for a lucrative clash with Mayweather since a his points victory over Julio Diaz in Sheffield last April.

Whoever the fans decide on to face Mayweather the fight is expected to take place in Las Vegas this May.

Khan defeated Maidana in 2009 when he was the world champion, it was the third defence of his WBA light-welterweight title, which should give him the edge in landing the fight and it is a more appealing contest. But Maidana defeated Mayweather’s friend Adrien Broner in his last fight and maybe Mayweather wants to get revenge and show Broner how it should be done?