Saunders fight off! Fury and Walsh now top the bill in title fights 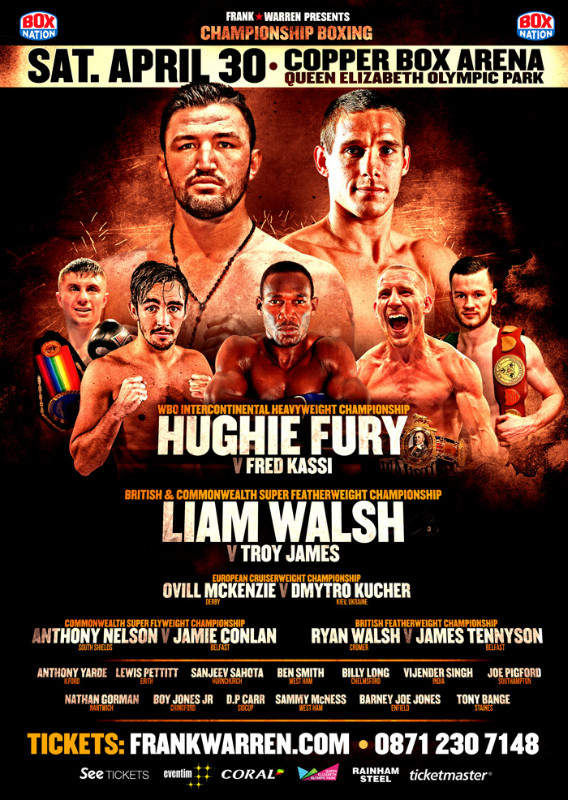 A hand injury has forced WBO World Middleweight Champion Billy Joe Saunders to withdraw from his maiden title defence against Max Bursak at the Copper Box Arena on Saturday 30 April.

However, undefeated heavyweight sensation Hughie Fury will now joint headline an action-packed card alongside red-hot talent Liam Walsh on a huge night of boxing featuring the best of British of talent, exclusively live on BoxNation.

Saunders, who injured his left hand during a training session, is devastated that he can’t make the the first defence of the world that he won with a blistering display against the then champion Andy Lee in December. He said, “I’m bitterly disappointed. I was really looking forward to making the first defence of my world title against Max Bursak but this is boxing and these things happen. Now it’s all about recovering properly and looking forward to a big 2016.”

Undefeated Fury will now joint-headline the card when he challenges for his first title – the Vacant WBO Intercontinental Heavyweight Championship – against experienced American Fred Kassi.

Fury has ripped through the division with his devastating, all-action style that has seen him halt 10 out of 19 opponents early with eight coming inside three rounds. The 21 year-old, who is the younger cousin of Unified World Heavyweight Champion Tyson, has quickly established himself as one of the world’s very best young heavyweight prospects and will be looking to make a big statement in his first title fight.

Hard-hitting ‘Big Freddy’ has a fearsome reputation with 10 knockout wins in 18 career victories; 9 of them coming inside two rounds. Kassi, 36, has only been stopped once in 23 career fights and will also be gunning for his first ever title.

“I’m aiming to make a big impact in the next few years and join my cousin Tyson at the very top of the sport. I’m delighted to be featuring on BoxNation again, I’ve boxed on their shows in the past and really enjoyed the experience,” said Fury.

He added: “This is the first title I’ll be going for so I’m buzzing to get in there and do the business. I was straight back in the gym after my win over Dominick Guinn and I’m feeling fit and ready to go again.”

Walsh was scheduled to defend his British and Commonwealth titles against James back in July of last year at the Manchester Velodrome, but the Coventry fighter was forced to withdraw due to a back injury sustained in training. The 29-year-old is chomping at the bit to make his eagerly-anticipated return to the ring.

He said: “I don’t just want to win, I want to be brilliant. Come fight night I’ll have been out of the ring just shy of a year and I’m buzzing to get back in there. Troy is a man I’ve known for a long time, I remember him from the amateur days. It’s a good fight and he’s a decent opponent; he went ten rounds with Terry Flanagan and he’s never been stopped. He’s done all of his eliminators and he’s earned his shot; he’s got my full attention.”

The stacked Copper Box card will also feature Liam’s twin brother Ryan, who will be making the second defence of his British Featherweight title against Belfast ace James Tennyson. It is set to be another historic night for the Walsh twins who both defend their British titles simultaneously; a first for British boxing.

“As amateurs me and Ryan both got to the Junior ABA Finals two years running. He won his the first year and I ruined it and lost, the next year I won my final and he lost his. We’ve never really had that double win on the same night and this time we’ve promised each other we’re both going to win; it’s going to be a special night,” added Walsh.

WATCH:
The Channel Of Champions, BoxNation, will televise live and exclusive on Sky 437/HD 490, Virgin 546, TalkTalk 415 and Freeview 255. Subscribe at www.boxnation.com

For ticket refunds please go to your original point of purchase.