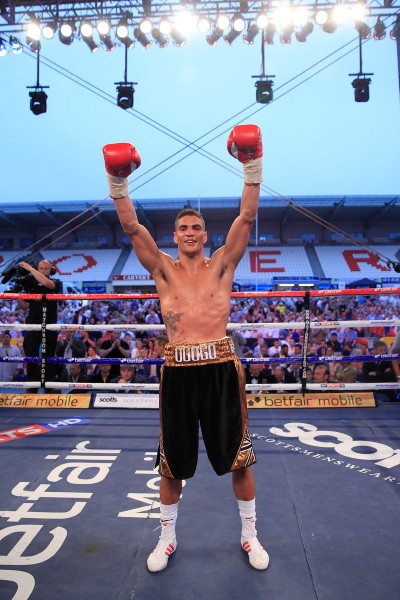 Anthony Ogogo will face Greg O’Neill at the SECC in Glasgow on March 1, live on Sky Sports.

The Olympic Bronze medallist boxes for the fifth time as a professional on the undercard of Ricky Burns’ WBO World Lightweight title clash with Terence Crawford, with the Lowestoft star tasting action for the first time in 2014 and looking to build on his impressive start to life in the paid ranks.

“I am really excited to be fighting on the March 1 bill and can’t wait to get back in the ring for the first time this year,” said Ogogo. “It’s a huge year for Glasgow with the Commonwealth Games going there this summer so it’s going to be great to be able to fight there and experience the city – it should be a fantastic atmosphere.”

Ogogo is joined on the bill by Team GB teammate and London 2012 Gold medallist Anthony Joshua MBE, who faces Hector Avila in his fifth pro outing.

Super Middleweight David Brophy looks to build on his 9-0-1 record on the bill, Glasgow Super Featherweight Michael Roberts can move to 14-0 with a win, former Team GB starlet Martin J. Ward is in six-round action while there is a trio of Scottish talents in four-round bouts in 20 year old Irvine Super Featherweight Ryan Collins, Wishaw’s Bantamweight Scott Allan and a debut for Glasgow’s Lightweight Ryan Smith.