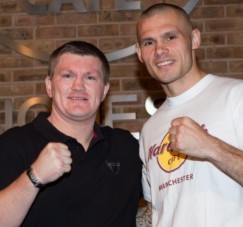 A press release was sent out by Hatton Promotions last week revealing they had given ‘career high’ paydays to Murray and had tabled deals for him to face Felix Sturm and Gennady Golovkin but made it clear and concise that when adding;’Time is now running out for Murray to make a decision”.

Murray (26-1, 11ko) then went on Twitter to announce he had ended his relationship with the Manchester Promotional company. “Just to let people know that I’m now finally contract free. Looking forward to what the future may bring.” Murray said.

Hatton Promotions has taken the decision to allow Martin Murray’s contract to expire.

This means the company will no longer financially invest further in Martin’s career following the St Helens boxer’s unwillingness to commit to opportunities negotiated on his behalf.

Offers for world title fights with Gennady Golovkin and Felix Sturm have been on the table for a number of weeks, but Murray has decided to hold off signing any agreements.

Neither of these offers will be available indefinitely, with Sturm now looking at alternative opponents and Golovkin only likely to appear in Europe once more before pressing forwards with his career in the United States.

31-year-old Murray and Hatton Promotions have historically enjoyed a healthy and successful relationship. However, things have been strained since a change in Martin’s management in 2013.

In the time that Martin has been with the promotional company, Ricky Hatton worked tirelessly to get him the best opportunities available – an incredible feat considering Martin is unable to box in the US.

When Martin was signed in 2009, he’d never boxed beyond eight rounds and had largely featured non-televised shows.

Since then he has won the British and Commonwealth crowns and boxed for two world titles.

In addition to the fights secured for him against Sturm and Sergio Martinez, fights have been brokered with Julio Cesar Chavez Jr, Gennady Golovkin and Jarrod Fletcher only for Martin to reject the opportunities or later pull out.

Hatton Promotions concedes there has been difficulties which have left Martin frustrated, such as the collapse of a December 2013 contest with Garth Wood and the bout with Fletcher not getting a World Title sanction. However, the reason for that falling through was beyond the control of all parties concerned.

In the circumstances, Hatton Promotions believe that the fights and purses offered and secured cannot be bettered and it has decided it is time for the parties to move in their separate directions.

Ricky Hatton said: “We got Martin a British title, a Commonwealth title and two world title shots. We secured him two further world title shots and all he had to do was make up his mind which one he wanted.

“He’s had six world title fights offered to him in two years. I don’t think anyone’s had more than that.