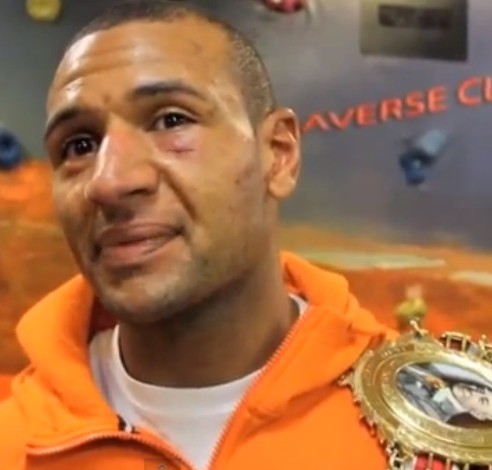 Bob Ajisafe became the British light-heavyweight champion when he claimed the vacant Lonsdale belt against inspired 40 year old veteran Dean Francis in a terrific battle. The fight was also part of the MaxiNutrition Knockout Competition, to find the best 12st 7lbs boxer in the country.

This was the second quarter finals of the night at the Rivermead Leisure Centre, Reading in a show staged by Hennessey Promotions and shown live on Channel 5 and the viewers tuning in and watching in the arena were rewarded with a real treat of a fight with both men giving their all. The judges all scored in favour of Ajisafe – 116-114 (John Keane), 116-114 (Marcus McDonnell) and 118-112 (Jeff Hinds).

Ajisafe, 27, from Leeds was busy from the start of the fight and was able to beat Francis to the punch and built up an early lead as he continually frustrated Francis’s attempts to get inside and kept the range well, although Francis was a constant threat.

Ajisafe had good success at the end of the 5th round when he hurt Francis towards the end of the round, Ajisafe went in looking for the finishing shots as he backed his man up on the ropes but the bell saved Francis from further punishment. In the 6th it was a a similar senario with the bell stopping a big moment for Ajisafe. Francis was showing real heart and determination to stay in there against the inspired Yorkshireman.

Francis continued to find himself in trouble throughout the fight but always found something inside to fight back. The referee Ian John Lewis might have been been tempted to stop the fight on a few occasions but Francis just kept returning fire and refused to fold. And although the former British and European champion couldn’t quite roll back the years, the old grit and ring savy from Francis was still there alright but the signs of battle were visible and his right eye had started to swell up.

Ajisafe finished the fight strong and impressed, the 11th was a big round for him and again he looked close to the finishing things only for Francis to survive.

In the last round Francis, who was bidding to become the second oldest fighter to win the British title at the age of 40, put up a spirited effort and pushed a fresh good boxer 12 years his junior all the way. Ajisafe used his trusty jab to see out the fight and run out a comfortable winner in the end.

In the night’s other quarter final of the tournament, Leon Senior vs Tony Hill was aborted after two rounds when an accidental clash of heads left Hill with a badly gashed forehead.