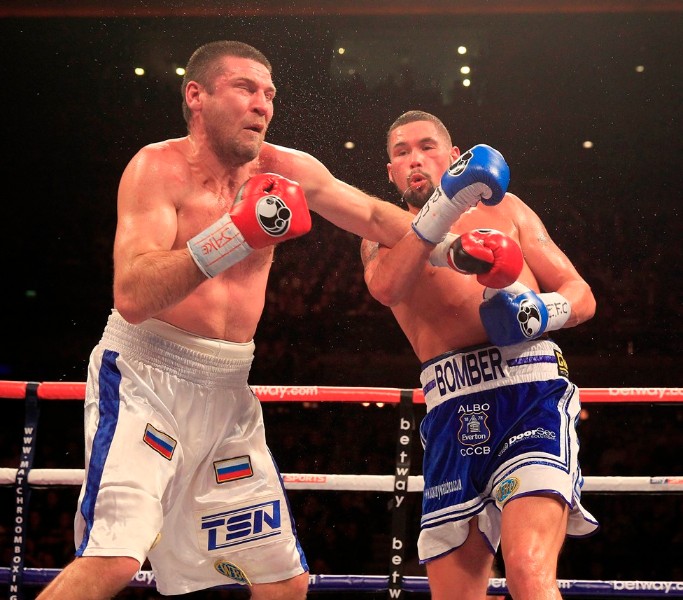 Tony Bellew announced his arrival at Cruiserweight with a final round stoppage win over Valery Brudov to land the WBO International title at the Echo Arena in Liverpool.

Bellew showed that the step-up in weight has afforded him extra ammo in his fists as he put Brudov down in the second with a big right hand and again in the sixth round.

The Liverpool star had to overcome pressure in the following round as Brudov hurt him with a right hand as Bellew himself looked for the KO, and a low blow from the Russian bought the hometown star time to regroup.

Bellew regained his control in the eighth and hurt the former World title challenger often in the remaining sessions, and in the 12th round he landed a peach of a left hand to floor the visitor and referee Phil Edwards waved it off 36 seconds left in the fight.

“I’m pretty happy, it’s a six out of ten for me, but the win is the main thing,” said Bellew. “I can’t thank the fans enough for the great support.

“I switched off in the seventh and the bruises on my face show I’ve been in a fight. I knew he was a dangerous guy but I have power at this weight and I haven’t seen people knock him off their feet. But he got back up and that’s what’s going to happen at Cruiserweight.

“I have a lot more work rate in me, I was very measured in there at times, I went into the later rounds and I was wondering if I was blowing a bit, but I’ve come into the fight on the back of a loss and a hard loss, and I think I have answered questions that I was asking of myself. I got him out late and that shows I can carry my power late.

“I’ve done the domestic scene and I’m in the sport to be World champion. I’ve been at the top in Britain, Europe and the Commonwealth; it’s time to be number one in the World.”

Kell Brook gained valuable rounds with an eighth round stoppage of tough Mexican Alvaro Robles in their ten-round clash. Brook has a shot lined-up at the IBF title in the summer and at times teed off at will against the 35 year old, who gamely stood his ground against the barrage from The Special One, until his corner stepped in midway through the eighth.

Kevin Mitchell is on course for a major Lightweight title shot on the undercard of Carl Froch’s WBA and IBF World Super Middleweight title rematch with George Groves on May 31 at Wembley Stadium connected by EE, after disposing of Mikheil Avakyan inside two rounds. Mitchell, who has rebuilt impressively since challenging Ricky Burns for the WBO crown in September 2012, had the Georgian down twice in the opening round and a third knockdown with a minute to go in the second round

Rocky Fielding put Charles Adamu down in the seventh with a straight left but was unable to put the Ghanaian away, with the Liverpool man doing 12 rounds for the first time in his career and all three judges scored the fight for the home man 120-108.