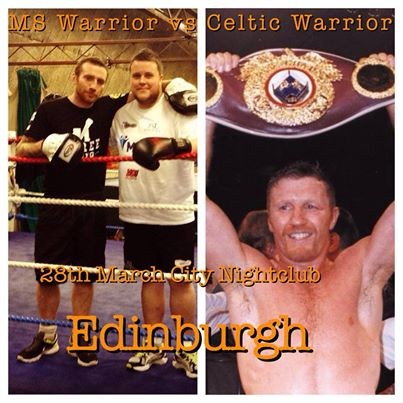 Boxing stars help a fan in his fight against MS

Boxers train in packs, but once the first bell sounds every fighter stands alone before their opponent.  However, one boxing fan has garnered ample support in his fight against the toughest foe he will ever face.  Edinburgh’s Dean Reilly was diagnosed with Multiple Sclerosis last year.  Since that diagnosis, the long-time boxing fan has picked up help from fighters, trainers and other people within the trade.

Steve Collins, Kenny Anderson and others to help Dean Reilly to battle MS‏

MS is a neurological condition — around 100,000 people in the U.K. suffer from it — and the effects are physically and mentally debilitating.  Suffers can experience vision problems, balance problems and dizziness, fatigue, bladder problems and stiffness and/or spasms as well as problems with memory and their emotions.

In a bid to bring wider attention and funds to his fight against MS, Reilly will face Steve Collins in a charity exhibition match in Edinburgh on March 28.  His road to the fight, and wider battle against his illness, has seen him pick up expert advice and support from former British Super middleweight titlist Kenny Anderson, Liverpool-born, Scotland-based trainer Danny Vaughan, cruiserweight contender Stephen Simmons, former British lightweight champion Derry Mathews and WBO European light-middleweight titlist Joe Selkirk.

It is a far cry from the day when Dean’s world was turned upside down in October of last year.  He decided to turn the bad news on its head and declared that, rather than this being his toughest fight, it would be the: “Toughest fight that MS has ever faced.”

Once Reilly had decided to tackle the illness head on, Kenny Anderson offered his services as a personal trainer.  This support helped Reilly get through a gruelling race called The Mighty Deerstalker (a 10K run), the New Year’s Day Triathlon and the Edinburgh Marathon.

Despite some tough early days, Reilly is now fully committed to defeating MS with the help of the boxing fraternity.  “I had a really rough period, but through Kenny I met Stephen [Simmons],” said Reilly when speaking to BoxingScene.

“’Simbo’ brought me into his team as the ‘glamorous water boy’, which led to me being introduced to Danny Vaughan.  Danny has since sponsored me via the 6 Vitamin Shot company he owns, he has also started to do fitness work with me too.  The energy shots though have given me back my life.  I know it’s hard to believe, but the difference they made has been miraculous.  I was more or less housebound without them.  They instantly gave me the help I needed to battle through the horrible MS fatigue.

“I started training with Danny and Stephen along with Joe Selkirk and Derry Mathews.  They all came down to the MS Therapy Centre for oxygen therapy, so I stitched them up by telling the Scousers that they could pick a flavour of oxygen.  Derry went for chocolate, but only after making sure there was no calories in it — me and ‘Simbo’, who was in on it, were in bits.  As you can imagine, Joe Selkirk changed his mind a couple of times between banana and strawberry while Danny’s jumping in saying: ‘I only want banana, so give that flavour to me’, as we even jokingly told them that there wasn’t a lot of that particular flavour left.”

Collins, 36-3 (21), held the WBO middle and Super middleweight titles, his wins over Chris Eubank and Nigel Benn brought him huge public acclaim.  The Irishman retired in 1997, there has been talk of a return to the sport, but, as things stand, the “Celtic Warrior” is coming back to take on Reilly rather than Roy Jones Junior, who was rumoured to be a potential comeback foe.  Despite being a retiree, Collins is still a hard competitor, something that Reilly is well aware of.

“Steve without a doubt is one my favourite boxers of all time, so to have this opportunity I can’t begin to explain how happy I am,” he said.  “When I told Kenny about Steve’s involvement he said: ‘I couldn’t have picked anyone better for you — he is not only the soundest guy I’ve ever met, he is the soundest guy you could ever imagine’.  I can’t wait to meet the man myself.

“I’m training with Kenny.  When Derry comes up for camp with Danny I’m bunking in with him at his hotel, but he doesn’t know this yet!  I’m hoping to stay for a couple of weeks with Derry and film it as I think it will be a laugh a minute with him.  So I’m getting training help from both Kenny and Danny.

“I was training with Kenny on Friday night.  It’s incredible training with him because he just seems to be able to get something out of me that I don’t know I have.  It is hard to explain, but imagine him screaming at you to do something, you just do it [Writer’s note: I can imagine.  I thought it would be amusing to say: ‘Do you ken, Ken?’ to Anderson, so I said it a few times.  One of his replies, a whispered: ‘Don’t call me Ken’, persuaded me to ditch that particular pun].  Afterwards I often think: ‘How the fuck did I just do that?’  Kenny just laughs and says: ‘Aye, you done alright there’.  The good thing with Kenny is that you know where you stand with him.  If you get a compliment, you earned it, so I’m still waiting for one from him. I hope that I’ll get a compliment from him after the fight with Steve because that would be like winning a world title.”

Danny Vaughn continued Reilly’s story.  He said:  “As a professional trainer for far more years than I’d like to remember — don’t let these boyish good looks fool you into thinking I can’t have been around that long — I’ve worked with some of the best in British boxing.  The first time I met Dean, I couldn’t tell he had any sort of condition like MS.  Through time, though, we started chatting and I happened to read his blog [http://deanvms.blogspot.co.uk].  That’s when I thought I need to give this guy some of my shots and try to help him as much as I can.  When you read his blog, you can’t help but be inspired, he battles every day to achieve things that some of us take for granted.

“Big ‘Simbo’ brought Dean into the team and it’s been the making of him.  The difference was nothing short of miraculous.  I am over the moon as you couldn’t meet a nicer guy than Dean.  I started off very slowly with Dean just letting him hit the bag and doing little bits of the circuits we do.  To his credit, the big man just got better and better, with the shots he was actually keeping up with the boxers and doing the full circuits alongside them.  So I started doing the body bag with him and it was clear to see he loved it, and so did I.  It’s worth mentioning that I train my guys very hard, so for any other boxer coming in its going to be a challenge let alone a Joe Bloggs off the street that has MS.”

He added: “I’m very proud of what Dean is doing with this fight against Steve.  I’m delighted to help and support him in any way I can.  I’m giving Dean 6 Vitamin Shots to share with the MS Centre that he raises money for.  I also took all the boys in for oxygen therapy, so got to see first-hand what a great place it is.  The way he’s going, I don’t think Steve Collins could beat him even at his peak.  Dean always listens and learns everything you tell him.  No matter who or what Dean fights in his life, he will always be the winner because he doesn’t have any quit in him.”

Anderson echoed Vaughn’s praise.  The Edinburgh-based boxer is a hard taskmaster, Reilly’s illness is acknowledged, but Anderson refuses to treat him any differently than anyone else.  Although there may be a compliment or two given out on the night if he can guide his charge to a solid performance against Collins.  “Gruffy, as I call him for his resemblance to the Gruffalo, is a good guy, he has reacted to adversity in a very positive and admirable way,” said Anderson when speaking about Reilly’s fight.

“I don’t give out many compliments, but he’s doing a good thing — he’s not getting fucked by MS, he is fucking it up.  I’ve got him through 10k runs to start with, a triathlon — a mental race where he was jumping through rivers and all sorts — then picked it up a level for the full marathon.  Nothing changes for Dean.  Aye, he’s had a rough patch of health before Christmas so I let him have some time off, but I don’t suffer fools and I don’t patronise anyone.  Dean has a condition that has some complications, but I got him across the finishing line at the marathon and I’ll get him over this challenge too.  Dean doesn’t ask for sympathy and I don’t give him any, we get along just fine like that.”

He added: “We will be doing Mount Kilimanjaro later this year together.  If he thinks climbing to the top of that is the end then he is on for a right shock as we’ll be doing pads when we hit the top.  I’ve done altitude training so it’s going to be interesting to see how he copes with it.”

The 6 Vitamin Shots, oxygen therapy and hard graft have given Reilly a new lease of life; the fight with Collins has also sharpened his focus.  Given the energy, passion and verve with which he’s coped with it all thus far, Reilly should have no problem slapping Kilimanjaro into shape.  The 33-year-old has also vowed to continue to attack MS until he knocks it out or takes it to a decision defeat.  You can follow his journey by checking out his Twitter account @deanvsms.

“The Celtic Warrior Vs The Celtic Warrior” takes place on March 28th at the City night club in Edinburgh.  Tickers are price £35 and can be bought directly from Reilly (@deanvsms on Twitter or Facebook/DeanVsMS) or by phoning 07447 939 387.  There are four other bouts on the card, which will be followed by a Q and A with Reilly and Collins