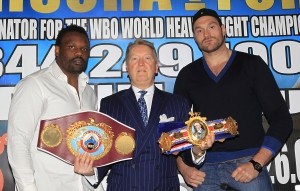 Fierce rivals Dereck Chisora and Tyson Fury collide in the biggest heavyweight grudge rematch in recent years with the winner earning the right to face Wladimir Klitschko for the WBO Heavyweight Championship of the World.

Not only will the winner get Klitschko, but the prized British Heavyweight Championship will also be on the line in this crucial showdown.

Chisora, Warren and Fury at the press conference – FrankWarren

Chisora v Fury headlines a blockbuster show titled ‘The Fight For The Right’  at the Phones4U Arena in Manchester on Saturday 26th July promoted by Frank Warren, in association with Queensberry Promotions and Hennessy Sports, and sponsored by Rainham Steel.

Chisora v Fury will be televised live and exclusive on The Channel Of Champions BoxNation (Sky Ch. 437/HD 490 and Virgin 546).  Join at www.boxnation.com

The pair first clashed in July 2011 at Wembley Arena with Fury inflicting the first defeat to Chisora’s then unbeaten record and snatching his British and Commonwealth belts on the judges scorecards.

Finchley puncher Chisora admits that he wasn’t in shape for the fight, but since then has turned his career around with eye-catching performances to win the European, WBO and WBA International titles and top ten rankings with three of the four major governing bodies.

This time he’s confident of reversing the result and getting his dream shot at Klitschko.

Chisora stormed, “Tyson Fury is in my way and I’m going to smash him out of it and get the world title fight against Klitschko.  Yes, Fury beat me last time, but that was at the worst time of my career.  You’re seeing the best of me now and there’s no way Fury can deal with that.  He hasn’t moved on in his career since he beat me, I’ve been fighting at a higher level while he’s been fighting nobodies.  This time I’ll dump him in a heap in the ring.  He’s still got it in the back of his mind that he’s beaten me, he won a battle, I’m going to win the war.”

The brash and fearsome Fury has marked himself out as one of the most exciting and thrilling fighters in the heavyweight division with his hard-hitting performances.  Last month  he stopped American Joey Abell inside four round and prior to that he flattened Steve Cunningham in the seventh round in New York after he was dropped in the second round.

Wilmslow banger Fury is confident that the fight won’t be going the distance this time and he’ll knockout Chisora inside the distance.

“It’s set to be a great night in my home city, the night I earn my dream world title shot in front of my home fans.  It means I have to go over old ground and batter Chisora again, but if that’s what has to be done, I’ll do it and in much better style this time.  That fight was nearly three years ago, I’ve moved into world class since then and remained unbeaten.  I’ll give it to him, Tubby has shifted that spare tyre around his waist and got himself into shape, but he can’t build muscle on his chin and when I land on it he’ll be knocked clean out.  Get one thing clear, I’m getting the world title fight against Klitschko, I’m the best in Britain and you’ll see whey on 26 July.”

Hall Of Fame Promoter Frank Warren is equally excited about putting together the biggest domestic heavyweight rematch in recent years.

He said, “This is the big one for both men, it’s the fight for the right to face Klitschko for the world title and one of the best to made on the world scene.  The winner will become the number one challenger to Klitschko and he’ll be forced to face whoever that man is, Chisora or Fury.  They are at the top of their game right now, and with everything on the line they will give it their all.  Chisora desperately wants the Klitschko fight, Wladimir’s already pulled out of a fight against him, but if Chisora beats Fury then Klitschko will have no option but to fight him.  Fury’s undefeated and is confident he’s got the beating of Chisora again.  Things have changed since the fight almost three years ago and with the world title as the golden carrot I believe we are going to see something really special between them.”