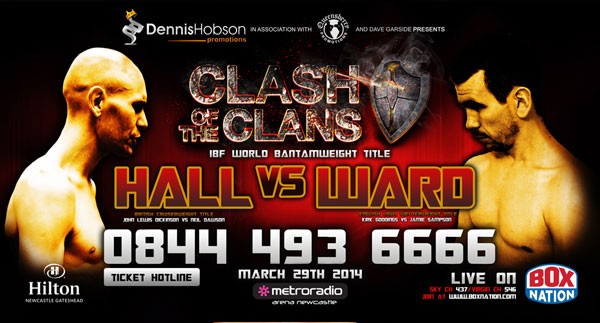 McCRORY:’I’LL BE AS PROUD AS YOU COULD EVER BE’

When Stuart Hall and Martin Ward make history at Newcastle’s Metro Radio Arena on Saturday March 29, there won’t be a prouder man in the house than Glenn McCrory.

Almost 25 years ago, McCrory had North East boxing fans dancing in the streets when he claimed the IBF cruiserweight crown and became the region’s first-ever world champion.

Now, with Darlington’s Hall and County Durham’s Ward about to enter the record books as the first North East fighters to face each other for top honours when they contest Stuart’s IBF world bantamweight title, we catch up with Glenn for his thoughts on the event.

Stuart Hall against Martin Ward, with a packed undercard, is going to be a huge event. What does it mean to the region?

It’s groundbreaking, and it’s what we need to get North East boxing going again. To get it going from strength to strength and make it bigger and better. We’ve got the best fans in the country in the North East, and there are good fighters. There’s an abundance of good amateur talent.

What we need is the promoters; the likes of Dennis [Hobson], Francis [Warren] and Eddie [Hearn] to come through and start to promote kids in the North East, and develop the talent we’ve got. When that happens we’ll match Liverpool, Manchester or anywhere.

Give us a breakdown of Hall versus Ward. How do you see it going and who wins?

I think it’s a good fight. They’re both champions. Obviously Martin Ward has done very well to get the Commonwealth title and then find himself fighting for the world title.

I think they’re both talented but I just think Stuey is the grittier. He’s a bit more solid; he’s got more substance. And I think that will be the difference.

I think Martin will fight well and put in a good performance but I think it’s Stuey Hall’s time now and he wants to enjoy being world champion. And I think he’ll be victorious on Saturday night.

Do you see it being an entertaining fight?

I do, because they’re both different styles. Martin can be flashy and has good skills, and Stuart’s just determined and he’s an old-time pro. No frills, just gets on with the job.

It’s a great show and I’m over the moon to be part of it. I’ll be there bringing Stuey into the ring and I’ll be as proud as you could ever be. It will be my crowning glory.