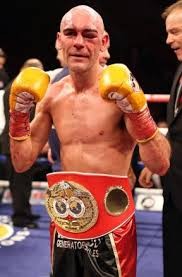 With Stuart Hall and Martin Ward both having lost to Lee Haskins previously; Darlington’s Hall insists he is taking little from the manner of their defeats as he prepares to make the first defence of his IBF world bantamweight crown against Ward at Newcastle’s Metro Radio Arena on March 29.

In July 2012, in a fight he readily admits he ‘didn’t turn up’; Hall lost over 12 rounds to Bristol’s Haskins in a shot at the European title. In April the following year, Ward faced the West Country man for the vacant British belt and was stopped in five rounds.

HALL: ‘HASKINS WOULDN’T HAVE STOPPED ME’

Since those reverses, the fortunes of both men have seen an upturn. Martin became Commonwealth king after a unanimous points victory over Ghana’s Gabriel Odoi Laryea in December last year. While, in the same month, ‘Stuey’ performed heroics in a ‘fight of the year’ contender to win his world title against South Africa’s Vusi Malinga.

Now, with Hall and Ward about to make history as the first pair of North East fighters ever to contest world honours against each other, Stuart says he won’t underestimate his County Durham foe.

“You can’t really read anything into it,” stated Hall. “But Haskins could have hit me for 15 rounds and he wouldn’t have stopped me. Haskins hasn’t got that much of a dig, and he’s got nowhere near the dig of Sergio Perales, or Malinga. Those guys hit proper hard!

“So for Haskins to stop Martin Ward, it gives me a little bit of incentive, but he’s going to be right up for this. It’s his chance to take this world title, and I’ll be more than ready for him. He’s going to be tricky. He’s got more of an amateur style. But it’s a long time, 12 rounds, isn’t it? I’ll get to him sometime.”

If holding onto his IBF belt wasn’t already enough motivation, then Stuart is also spurred on by the derby aspect to the upcoming encounter. With both men hailing from the region, and with the fight taking place on a huge night in Newcastle, former British champion Hall says he refuses to lose.