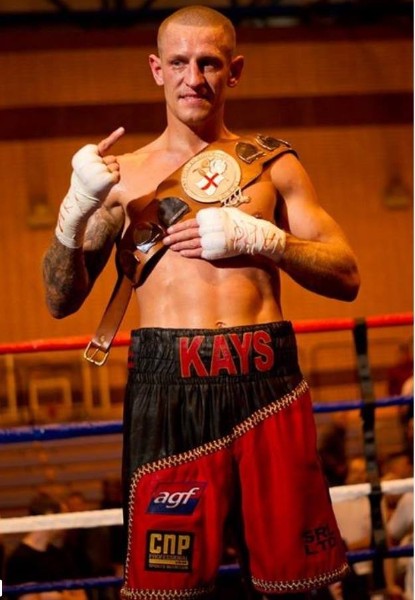 Jon Kays successfully defended his English super-featherweight title with a points win over Lee Glover at the Oldham Sports Centre on Saturday night.

Kays, 30, making the first defence of the belt he won in October last year against Kevin Hooper, looked to take control of the fight early from behind his jab but Glover was determined to draw the champion into a fight. The pace was quick throughout and Kays had to be on his game to stem the attacks from an inspired challenger who pushed him all the way.

Glover, 26, who was having just his second fight in two and a half years, had got himself in good shape for his big chance to break onto the domestic scene and had been sparring British lightweight champion Martin Gethin in preparation. The Tipton man had come up the M6, determined to take the title back to the West Midlands and gave it his all.

But Kays who’s record now stands at 18-3-1, 4KOs, was focussed and intent to hang onto the belt and dug in like a champion. Kays fought fire with fire whenever Glover wanted to trade and found himself involved in a scrappy tear up when he could have made it easier for himself, when he stuck behind his jab and threw the one two’s, he was much more effective.

Kays says he went into the fight with a plan and stuck to it for most of the fight although admits to straying of plan from time to time during the contest but disagreed with the judges majority decision, believing he was a clear winner.

“The game plan was to pressure him, fire in the jab to the chest and bring the right hand in over the top and to keep a high work rate, which worked all night long for me to be honest.” Kays told www.britishboxers.co.uk

“I did tend to get a bit involved at times and I was a bit over eager but I was surprised that the judges had it a majority decision, I’ve no idea where they got them scores from? It was tough in there, he is not the toughest I’ve faced but he was tough!

Kays is a popular character and his fan base seems to be growing with every fight and in Oldham, his faithful following were out in force again to cheer on their man and Kays appreciates everyone of them who came out to support him; and with news in the pipeline and the announcement of a big fight coming this Wednesday, ‘2 Smokes’ and his fans look like they will have plenty more to cheer about.

“The fans were great again, that’s the biggest crowd I’ve had since turning pro, I want to thank everyone who came and I’m happy to get the win and keep the belt for them, they created a real atmosphere.” added Kays.

On his next fight? Kays wasn’t giving anything away; “I’ve got a few things planned out and some news is to be released soon but I’ve got keep tight lipped till Wednesday though.”

Results from the Oldham Undercard