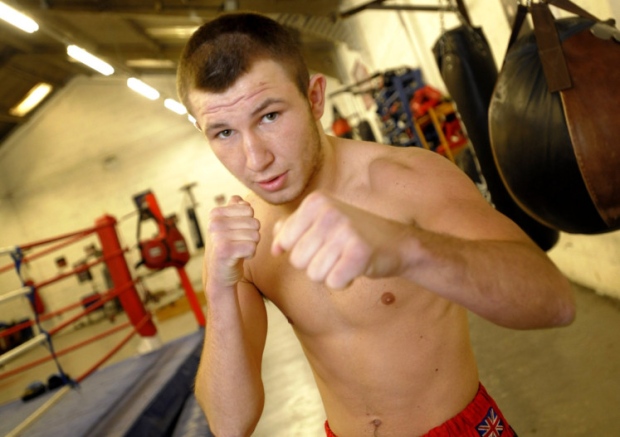 Isaac Lowe has promised that the English featherweight belt is returning home with him when he faces Lee Glover for the vacant title on April 4 at Blackburn’s King George’s Hall.

In a show topped by the Commonwealth super-middleweight title fight between Luke Blackledge and Liam Cameron, and streamed live and free on vipboxing.tv, Morecambe’s Lowe says he will put on an explosive performance and stop Glover late.

“I want to go in there, make a statement and show the featherweight division that I’m a force to be reckoned with,” explained Lowe, who is a long-time friend of Tyson fury.  “I’m not here to mess around; I’m looking to get him out of there.  As the rounds go on he’ll tire, I’m a good body puncher and I’ll start hurting him.

“I’ve been sparring with Jamie and Gavin McDonnell and Josh Warrington, and you can’t get better sparring than that.  I’m coping well with them and Lee Glover isn’t a patch on them.  I’m going to be explosive and want to make a real statement.  I think I’ll get him out of there by rounds eight or nine.”

Glover is by far Lowe’s best opponent to date.  In 11 outings, ‘The Tipton Slasher’ has only been beaten by Jon Kays in a 2014 English super-featherweight tilt, and by Choi Tseveenpurev in a Prizefighter Tournament.  Lowe, unbeaten in nine with three KOs, will be facing only his second foe with a winning record but says he will prove he is the real deal.

“He’s a tough lad who is more experienced than me in terms of rounds and, yes, he’s my toughest test.  I’ve watched him on YouTube and he likes to hold, he’s a messy fighter.  He’s coming to win but I’m a much better boxer with more ability.  He’s used to losing, I’m not – I don’t know how to lose.  It’s going to be a comfortable night’s work.  On paper it’s 50-50 but on the night you’ll see what a rising talent I am and that I’m a class above him.”

Promoter Steve Wood stated: “Isaac has done all that’s been asked of him so far.  He’s beaten everyone we’ve put in front of him and now he’s been given this opportunity to step up.  He talks the talk and this fight is the chance to show that he can really back it up.  He’s an aggressive, come-forward fighter and the fans will like what they see.

“This is one of the best shows that VIP Promotions have put on.  The headliner is a TV fight in itself, and we’re backing that up with this cracking English title fight.  We’re going from strength to strength, are getting some great crowds and the viewing figures on vipboxing.tv have been beyond expectations.  This show will raise the game even further.”

VIP Promotions presents an evening of boxing at Blackburn’s King George’s Hall on April 4.  Headlining will be Accrington’s Luke Blackledge versus Sheffield’s Liam Cameron for the vacant Commonwealth super-middleweight title.

Tickets priced at £60 (ringside) and £40 (general) are available on the door, from all boxers, or at vipboxing.tv – mThe show will also be streamed live and free at vipboxing.tv – in association with 666bet.com Keep updated on VIP Promotions’ news by visiting vipboxing.tv or follow on Twitter @vipboxing and Facebook.