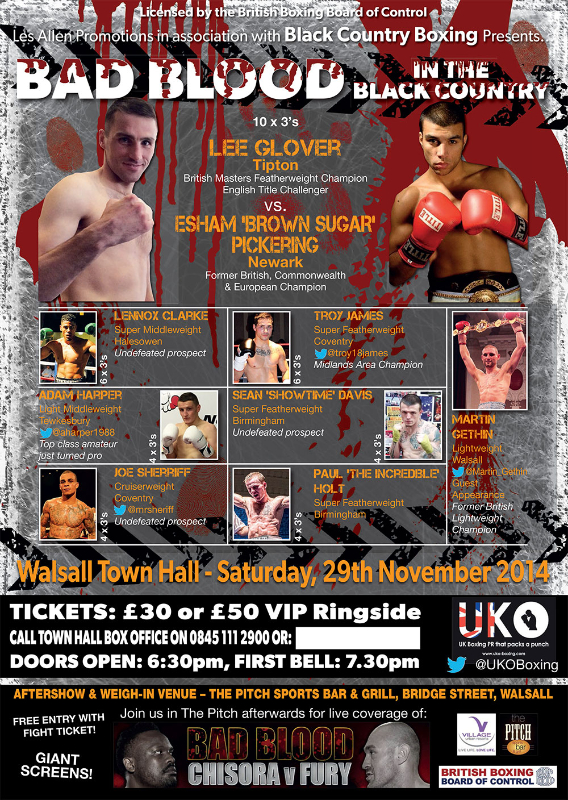 Bad Blood In The Black Country

There will be Bad Blood in the Black Country next month as professional boxing returns to Walsall Town Hall on Saturday, 29th November.

On the same night that ‘Bad Blood: Dereck Chisora vs. Tyson Fury’ in London, Black Country Boxing, in association with Les Allen Promotions, will be hosting a bumper show of their own.

Bad Blood in the Black Country features a host of the area’s to fighters.

Halesowen super middleweight prospect, Lennox Clarke, is also in action as he looks to extend his unbeaten start to life as a professional boxer.

Fresh from his British Eliminator victory over Ronnie ‘The Shark’ Clark, Troy ‘Terrifying’ James is also making an appearance. The Midlands Area Super Featherweight Champion is keeping himself ticking over as he awaits a shot at the Lord Lonsdale belt.

Bad Blood in the Black Country will finish in time for boxing fans to make their way to The Pitch Sports Bar and Grill on Bridge Street, Walsall, where the Chisora versus Fury fight will be shown live on Giant Screens. Fight fans will be able to gain free entry into Walsall’s premier night spot on production of their boxing ticket.

“It promises to be another great night of Black Country boxing,” Co-Promoter, Errol Johnson, told www.uko-boxing.com. “We wanted to make the most of the hype around Chisora and Fury whilst showcasing what the Black Country boxing scene has to offer.

“By combining the two, it’s the perfect night for fight fans. After watching live boxing at the fantastic Walsall Town Hall, with a stacked card, fans can join the boxers who’ve they’ve just been cheering on at The Pitch to see the action between Britain’s best heavyweights unfold.”