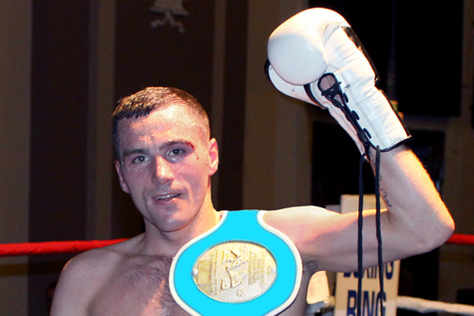 Glover takes on the ‘KO Kid’ in bid for English title

Lee Glover is ready to spring a surprise this evening (September 5th) as he makes a second attempt at the English Super Featherweight Title.

The Tipton Slasher travels to Leeds to take on current champion, Andy Townend, on Matchroom Boxing’s ‘Marching On Together’ show at the First Direct Arena.

‘The Tipton Slasher’ lost a paper-thin decision against Oldham’s Jon ‘2 Smokes’ Kays 18 months ago but is determined to go one better against Barnsley’s Townend who, with 9 stoppages from his 13 wins, has earned the nickname the ‘KO Kid’.

However, Glover is in confident mood and ready to cause an upset.

“Nights like this are what I’m in the game for,” he said. “Sometimes you thrive on pressure and I think this will bring the best out of me.

“I’m not worried about his power, he can come out all-guns-blazing and I’ll use my boxing skills to keep him at bay.

“But this fight is in his backyard, on his promoter’s show and I’ve already thought I’d won the title once and it’s managed to get away from me.

“If I get the chance, I’ll take him out of there. I know he’s a strong lad but I can punch, as well. I’ve hurt people in the ring and I’ll do it again.

“I feel that, overall, I’m the better boxer and I need to go out there and prove it now. If I do that, I’ll be knocking on the door to even better things.

The show is headlined by hometown hero, Josh Warrington, who will defend his WBC International and Commonwealth Featherweight title against Joel Brunker.

Warrington makes the third defence of the title he claimed in Hull in November 2013, and will look to add the challenger to the impressive scalps of Rendall Munroe and Martin Lindsay. It will be aired live on Sky Sports this evening.