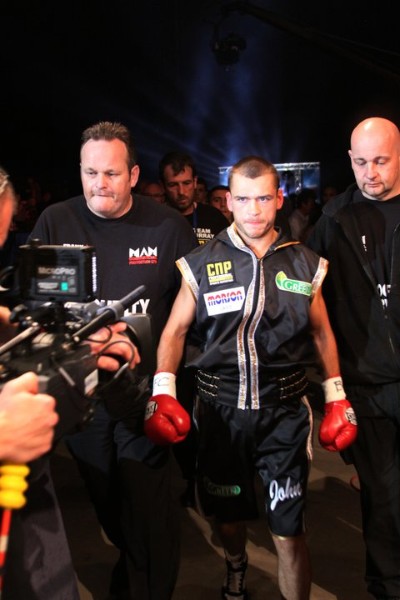 John Murray is Back with a vengeance! – pic Al Stevenson

‘The Manchester Machine’ John Murray looked well oiled, mean and back to his best in his latest win, stopping John Simpson in the 2nd of a schedule 10 at 2:58 of the round in an impressive performance at the SECC in Glasgow, on the undercard of Ricky Burns’ WBO world lightweight title defence against Terrence Crawford on Saturday night.

Murray, 29 the former British and European champion and world title challenger pressed Simpson purposefully from the opening bell, letting the shots go, he hurt Greenock’s Simpson with the first combination he threw and continued to back his man up, sinking in the hooks and straight right hand.

Murray looked massive compared to former British super-featherweight champion Simpson and he was just ruthless in his approach. Simpson went back to his corner at the end of the first round looking a little dazed and beat up and there was no wonder, every time Murray landed it had a thudding effect on Simpson.

The second round didn’t start any better for Simpson when Murray opened it with a sweet left hook, Simpson, always tough, took it but it wasn’t long before Murray would start testing his opponents body with his trade mark mid section attacks and if there were any doubts that Murray had lost any of his old instincts to finish a wounded opponent, he nearly cut Simpson in half with a viscous left hook to the floating rib and dropped him to the canvas. He bravely got up, Simpson is tough alright! After partially filling his lungs back up with oxygen the fight resumed and Murray again went on the offensive.

The writing was now on the wall and Murray went to work and again after more Murray punishment, Simpson was down from another body shot and a left hook to the head to see him on his way. Again he Simpson got up and yelled his defiance as the action continued. Murray was always a good finisher and again he went to work methodically and again Simpson was down. Again he got up and again was ready to continue but this time referee Victor Loughlin waved it off to the protests of the warrior inside Simpson.

The lightweight division welcomes John Murray back and a division already packed with talent and potential big domestic clashes has just got red hot!

The talk is now about an all Mancunian war against Anthony ‘Million Dollar’ Crolla, former stable mate of Murray’s under Joe Gallagher and friends. Infact Murray’s gym is in the same building in Manchester where Crolla helps to train some local youngsters for the Fox ABC. They pass each other on the stairs in the old Mill most days and probably will leading up to the fight if they do eventually meet. But both are professional enough to put all aside and produce a fight worth waiting for.

Murray takes his professional record to 33-2, 20KOs – Simpson drops to 25-11, 11KOs and should consider stepping back down to super-featherweight if he is to continue his boxing career, for Murray to Machine moves on!

Other results from Glasgow

Scotty Cardle stopped Paul Appleby in the 8th round.