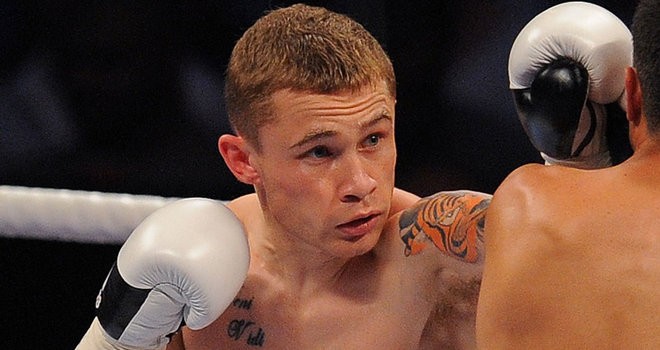 Carl Frampton increased his stock value last night with a KO win over Hugo Cazares in Belfast. The fight – a WBC Eliminator – promised to be Frampton’s biggest test yet, but turned into a bizarre spectacle in the second round. Frampton looked in great shape and after an energetic first round from both fighters, round two proved that boxing is anything but predictable.

Frampton – the younger man by 9 years – looked busy and full of ideas and managed to land a great left hook which sent the awkward Cazares to the canvas towards the end of the second. Cazares seemed to recover in good time and was on one knee laughing in Frampton’s direction when the Ref got to ten and counted him out. He leapt up and protested, but there was no denying he’d missed the boat by a long way and by then Frampton was celebrating, ditto the crowd.

The commentators thought Cazares had misunderstood the ref; I guess we’ll never know, but it was a socking left hook and considering Cazares hasn’t been stopped in 5 years, I think we can all take it as gospel now that Carl is a genuine puncher at this level.

A strange stoppage, and one which is hard to explain, but victory leaves the door to the title well and truly open for Carl Frampton. If only they were all that easy.