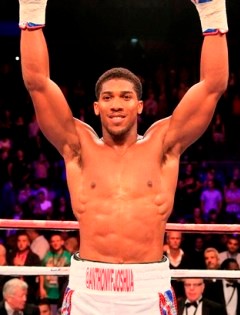 Anthony Joshua MBE is the first fighter confirmed for the undercard of Carl Froch’s WBA and IBF World Super Middleweight title rematch with George Groves at Wembley Stadium connected by EE on May 31st, live on Sky Sports Box Office in association with Betway.

The Olympic Gold medal hero has raced to 5-0 with all five wins inside the distance since turning pro in October, but a hand injury sustained in his last win over Hector Avila in Glasgow has ruled him out of fighting in Manchester on April 19 on the undercard of Scott Quigg’s WBA World Super Bantamweight title defence against Nehomar Cermeno.

“Anthony will play a massive part of the huge Wembley show on May 31,” said promoter Eddie Hearn. “I will be looking to announce his opponent next week and we’re looking at stepping him up on the biggest stage British boxing has ever seen.