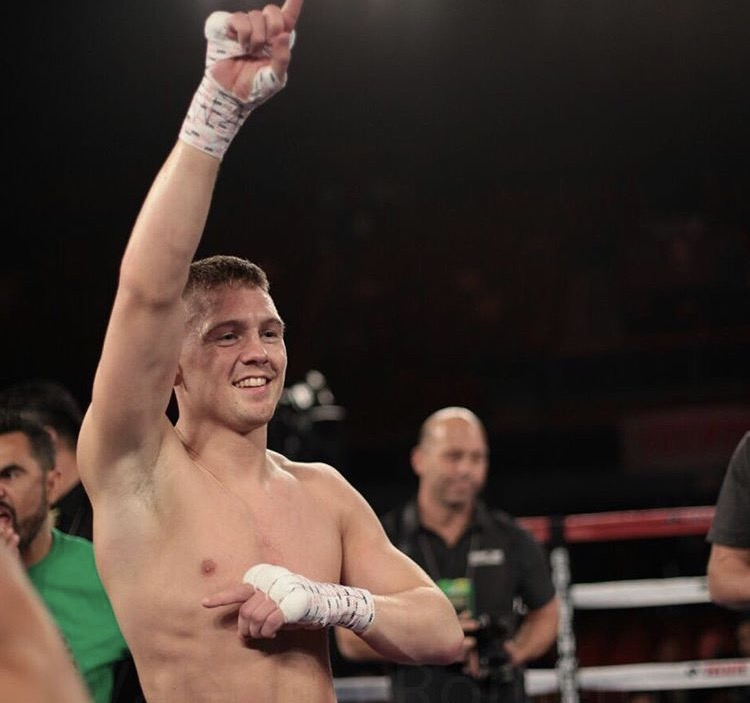 Jason Quigley (12-0, 10 KOs) is one of Irelands finest prospects; At just 25-years-old and following a stellar amateur career, “El Animal” signed with Oscar De La Hoya’s Goldenboy Promotions and moved from Ballybofey, County Donegal to Los Angeles, California. As he prepares for his next bout, the Irishman took some time out to reflect upon his progress in 2016 and how his career has gone so far.

“I’m very pleased,” Quigley responded, when asked how he reflected on his progress last year. “I had a big step up in class against [James] De la Rosa, who on paper really was a step up and I was going into that with only 10 fights, whereas he had been in there with world champions,” he said before adding, “For me to go in there, and go the 10 rounds with him and to outbox him for every round was a great confidence booster.”

“You can tell immediately that he’s someone who knows the game, and his amateur background is serving him well as a professional. We will keep him busy and move him the right way, and I have no doubt that he will be a world champion one day.”
—Oscar De La Hoya

De la Rosa came into the bout having had back to back training camps—he had previously been booked in to face David Lemieux, but the fight was cancelled after the Canadian missed weight. The Mexican middleweight went into the bout with a record of 23-3 and this marked Quigley’s first 10 rounder; he came through the bout with flying colours and earned unanimous scorecards of 100-90.

Unfortunately, following the bout the contender sustained an injury to his wrist, and so followed a period of inactivity which Quigley somewhat surprisingly reflects upon as a positive circumstance in these early days of his career.

“I sprained my wrist, and that put me out of the Canelo undercard in Texas—that was a frustrating time for me, but I’m happy that it happened,” he explained. “It showed me how to settle down, relax and be patient. I think it has set me up to be able to deal with something like that in the future.”

To end the year, Jason Quigley faced off against hard hitting Jorge Melendez. The Puerto Rican entered the bout with a 30-7-1 record and had amassed 28 knockouts. This marked another significant rise in quality for Quigley, but he dealt with the task in impressive fashion.

“What can you say about that?” he asked. “It was a first-round knockout, there’s not much more you can say,” he reiterated with a laugh.

When reflecting more on his performance, he added: “I was very pleased with how I stayed so relaxed. His game plan was to come out and come and bully me, and show me who the boss was. He had nearly 40 fights and I was just going into my 12th. I can see from that where my experience and maturity is growing.”

The fight took place as part of the undercard for Bernard Hopkins’ swansong against Joe Smith Jnr, and this was touted as one that could blossom into a really entertaining fight, Quigley however must have had other ideas.

It’s no surprise that the young middleweight is constantly improving, upon recalling some of the names he has had the pleasure of sparring, Quigley mentioned the likes of Gilberto Ramirez, David Lemieux and the legendary “Sugar” Shane Mosley—this being one of the main selling points in his decision to uproot his life in Ireland and move to sunny Los Angeles (not a bad dilemma to have).

He said: “This is why I chose to move out here to further my career. This is where it all happens. No matter what gym you go into over here, you’re going to be in with a current, past or future world champion.”

He even reminisced about how “Sugar” Ray Leonard and Timothy Bradley had been in the gym to say “Hi”. “All these guys are unbelievable and they’ve helped me learn, grow and progress. I’m really lucky and blessed to be given these opportunities I’ve given,” he said.

Speaking of plans for 2017, the goal was simple. “I just want to keep growing and stepping up and achieving my goals. Any man that is in my way, I need to eliminate him,” he stated.

“Carl [Frampton] has paved the way for all us professional fighters coming through. He’s showed that it’s possible and it’s up to us now to grab it with both hands. Carl has set the mark, and it’s all friendly competition. When Carl achieves something, then one of us wants to beat it.”

However, ahead of that Quigley has big dreams; with a real passion in his voice he explained how he’d love to have a homecoming fight back in Ireland, but not just any fight.

“I know how hard it is to travel all the way over to Los Angeles, and I’m so grateful for the people who are doing it already. It’s very humbling, and I want to be able to give back.”

Upon my mention of Carl Frampton’s exploits overseas, Quigley told of the friendly competition going on now that Irish Boxing is peaking.

“Carl has paved the way for all us professional fighters coming through. He’s showed that it’s possible and it’s up to us now to grab it with both hands. Carl has set the mark, and it’s all friendly competition. When Carl achieves something, then one of us wants to beat it.”

Eric Gomez, the Senior Vice President of Goldenboy said of Quigley: “I just feel he’s one of our top prospects, if not our top one.” So if he can continue winning, then there’s no reason why that big Irish homecoming fight can’t be made in the future.

De La Hoya will certainly hope that his words can come true, as he has previously stated: “You can tell immediately that he’s someone who knows the game, and his amateur background is serving him well as a professional. We will keep him busy and move him the right way, and I have no doubt that he will be a world champion one day.”

For now though, it’s just a case of waiting and enjoying the journey and before long we’ll see for ourselves just how far he can go.