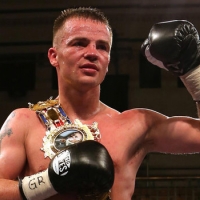 Still Britain’s only ever world amateur champion, southpaw Gavin is undefeated in 19 fights with 12 stoppages and aims to add the European title to his British and Commonwealth belts.  The 28-year-old has also won the Irish title at light-welterweight and the WBO Intercontinental belt at welterweight. He outclassed Namibian Sacky Shikukutu in his last fight in March to defend his Commonwealth title.

Bundu, from Lazio, Italy, won Bronze at the 1999 World Amateur Championships and represented his country at the 2000 Olympics.  Turning professional in April 2005, Bundu, also a southpaw, has amassed an unbeaten record of 32 fights (including two draws) and has claimed the Italian, IBF Mediterranean, European Union and WBA Intercontinental titles.  He won the European title in November 2011, making five successful defences with his last against Britain’s Lee Purdy and stopping him in the final round.

“He’s a good fighter and I’d be stupid to underestimate him,” Said Gavin.

“He beat Purdy in a tough hard fight over here so he’ll have no second thoughts about fighting me in front of my home crowd in Birmingham.  He’ll have my full respect and I’m preparing for a hard twelve rounds.  Either way, if it goes the distance or I stop him, I’ll be leaving the ring the winner,”

“He’s a short, compact fighter and has good all round skills, it will take a great fighter to beat him and I’m very confident in my skill and ability to be the man to beat him for the first time.  Bundu’s got good fitness for 39, but he’s not like was when he was 30 and you don’t know how much the Purdy fight took out of him.  I’m not 30 yet and I believe I’ll have the advantage as I’m younger and fresher,”

“All I’m focused on right now is beating Bundu and achieving my dream of winning the European belt that I’ve dreamt about since I was a kid.  I’ve won the British and Commonwealth titles, but winning the European title and holding all three belts like the great British fighters in the past will be a fantastic achievement.”

The unbeaten Aussie has been involved in some brutal and exciting wars that have made him a favourite with the fight fans.  In his last fight he knocked out Eric Martel Bahoeli in five rounds after overcoming a nasty cut above his left eye.

On the undercard, Birmingham brothers Thomas and Joe Costello feature on the same professional show for the first time.  Middleweight prospect Thomas will take on Huddersfield’s Alistair Warren over six rounds, while hot lightweight talent Joe – who made an explosive pro-debut with a first round KO of Youssef Al Hamidi last month – takes on Derby’s Lee Connelly in a four rounder.