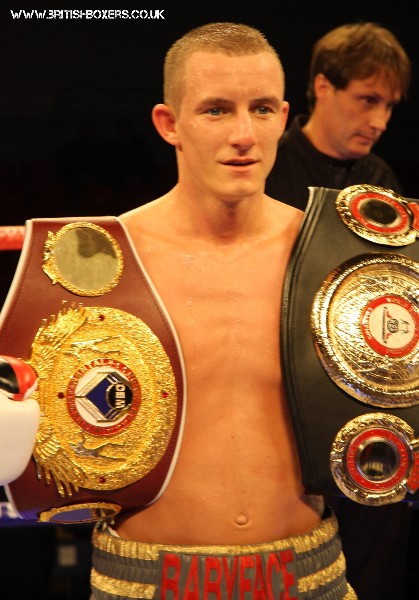 Paul Butler – The best is yet to come

New IBF World Bantamweight Champion Paul Butler says the best is yet to come from him after he dethroned Stuart Hall at the weekend.

The Ellesmere Port ace won the title by split-points decision – in just his 16th professional fight and only his second at bantamweight – by using his quick footwork and hand speed to beat the bigger and stronger Hall.

Butler, 25, thanked his loyal fans who cheered him to victory to become Ellesmere Port’s first ever world champion.

“That was the best night of my life, unbelievable, something I’ll always remember,” Said Butler.

“To win the world title was my dream since I was an 11-year-old amateur first walking into the gym and putting on the gloves and it still hasn’t sunk in that I’ve finally achieved it, and it won’t do for a while,”

“I’m even prouder to become the first world champion from my home city of Ellesmere Port.  Paul Lloyd came close to it and I was saying to myself during the fight not blow it, if I needed a boost, I just looked up at my cheering fans and it gave me a massive lift,”

“I was in control in the early stages of the fight and Stuey did come on strong in the mid rounds, but I turned it up in the final rounds and I was sure that I’d done enough to win the world title,”

“As for what’s next, I’ll sit down with my promoter Frank Warren and my team and decide where we go.  Knowing that I could win the world title in only my 16th fight is a huge confidence booster, there’s plenty of things I learnt and need to improve on, but I’ll just get better and better,”

“I wish Stuey all the best for the future, he said he’s still fighting on, he put up a tremendous battle and I think we gave the fans and BoxNation viewers a great fight.”

In the chief-support Sedgefield ace Bradley Saunders, a 2008 Beijing Olympian and 2007 World Amateur Championship Bronze medallist, stormed to his first professional title with an explosive first round stoppage of Ville Piispanen in the first round with a rib-crunching left to the body.

Big-hitting Ovill McKenzie added the British belt to his Commonwealth title with a stunning second round stoppage of Jon Lewis Dickinson.

McKenzie captured the Commonwealth title in his last fight knocking out Tony Conquest in five rounds and followed that up against Dickinson with a blockbuster right hand.