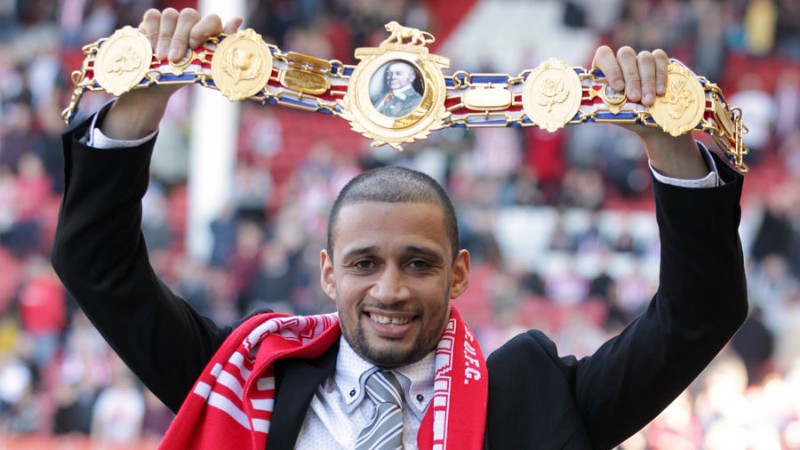 British champion vows to rip the Commonwealth crown from Limond

Curtis Woodhouse says he’s ready for a hostile reception in Glasgow – but the home fans can do nothing to stop him adding the Commonwealth Light Welterweight title to his British crown when he challenges Willie Limond on Friday June 27 at the Braehead Arena, live on Sky Sports.

Woodhouse puts his British title on the line in his first defence since his emotional victory over Darren Hamilton in February in Hull, ripping the title from the champion with a gutsy split decision in Hull.

The former football star looked set to hang up his gloves but the 34 year old chose to box on for chances like the one in Glasgow – the opportunity to win another new belt and move closer to landing the Lonsdale belt outright, and says he’ll revel in his role as the pantomime villain.

“I chose to come to Scotland, nobody has forced me to come – this is a voluntary defence,” said Woodhouse. “If I wasn’t up for the atmosphere or I was scared by it I would have gone a different route and looked for somebody else or demanded Willie came to England. I am sure with the British title on the line he would have come to England.

“The atmosphere is something I am excited about and is one of the reasons I wanted to fight Willie Limond in Glasgow. I am not running away from it, I am going to embrace it and I play quite a good pantomime villain so I will enjoy the stick I am going to get.

“A lot of boxers who have been to fight in Scotland have always spoken highly of the fans and of how they have been treated and I am sure the Scottish fans are going to love my style because I am not coming to fiddle about on the outside and knick this on points. I am coming to have a fight and I think the Scottish fans appreciate that and I think they will probably hate me during the fight but by the end of the fight I will have gained their respect.”

Woodhouse’s battle with Limond is part of a great night of action in Glasgow as Ricky Burns aims to get back on the World title trail as he faces Dejan Zlaticanin for the WBC International Lightweight title in an official eliminator for the World title.

Cruiserweight rivals Stephen Simmons and Wadi Camacho are set for their grudge match with the Edinburgh man’s WBC International Silver belt on the line, Jon Slowey faces Kris Hughes for the vacant Celtic Featherweight title, unbeaten Lightweight star Scotty Cardle is set for a step-up fight and there is action for unbeaten Scottish talents David Brophy and Michael Roberts.