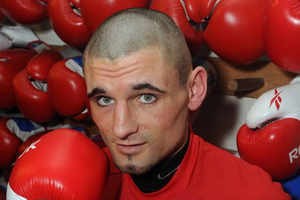 Gethin: “The Pressure’s On Flanagan”

Martin Gethin believes the pressure is all on Terry Flanagan this weekend.

The Walsall boxer is ready to reclaim the British Lightweight Title when he takes on his undefeated opponent at the Phones 4 U Arena in Manchester this coming Saturday, 26th July.

Gethin lost his Lord Lonsdale strap in a paper thin split decision defeat to Derry Matthews back in May. The winner of that contest was contracted to face Flanagan this weekend and, with Matthews forced to vacate due to injury, Gethin was given the nod to challenge Flanagan for the strap he had held since January 2013.

The Walsall boxer goes into Saturday’s contest as the underdog. Coming off that defeat to Mathews, who Flanagan put to the sword in Prizefighter, against a 24-0 prospect, Gethin is rank outsider to win back the British strap.

However, the 30 year-old is used to being the underdog and is keen to pressure the highly-rated Flanagan, who has earned rave reviews during his 24-fight unbeaten spell as a professional boxer. ‘Turbo’ Terry, in Gethin’s opinion, has it all still to prove and is yet to be really tested.

“Flanagan hasn’t really been tested yet,” Gethin confirmed. “Don’t get me wrong; he’s a really good boxer but it’s whether he’s got it in him when I put the pressure on.

“Has he got the lungs to last 12 rounds? I’m not sure. I’m always the underdog in every fight I have so I’m under no pressure at all.

“He’s the one under pressure – he’s boxing in front of a big crowd in Manchester for the British title.

“It’s his first big fight and he’s the favourite. The pressure is on him.

“Flanagan has only been eight rounds, a couple of 10-rounders, and he’s going into a different world if he does reach the later rounds. We’ll see on Saturday I suppose.”

Tickets and VIP packages are available through Eventim on 0844 249 1000 or eventim.co.uk