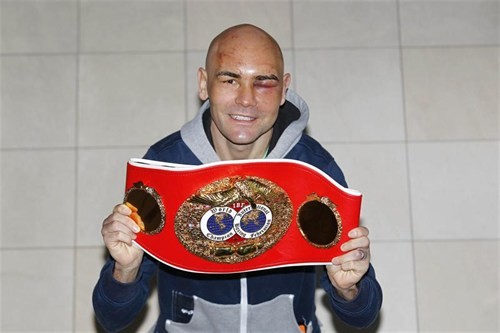 Hall takes on unbeaten Randy Caballero (pictured below) in Monte Carlo this Saturday (October 25) for the vacant IBF world bantamweight championship, in an attempt to reclaim the belt he lost to Paul Butler in June.

With the fight screened live on Channel 5, Hall and American Caballero should make for great viewing.  Both fighters punch hard – Caballero has KO’d 13 of 21 opponents – and neither man will need to go looking for the other.

After outbidding huge stateside promoters Golden Boy to stage the contest, Sheffield’s Hobson is convinced that Hall will repay his faith and do the business in the ring.

“It’s so close to fight-night, and I think it’s so close as a contest,” explained Dennis.  “It’s a genuine 50-50 fight.  I think initially people thought Caballero was a bit special because he’s a Golden Boy fighter, but they can’t think that much about him because I outbid them in the purse bids!

“Caballero has never been in with anyone as physically strong, as seasoned, or who hits as hard as Stuart Hall.  I fancy Stuart; I think it’ll be tough, but it’s on our terms.  I know he’s not fighting at home, but he is in a sense because it’s co-promoted by me.  He’s got the comfort of it being in our time-zone, he’s got a new trainer, and he seems as happy as anything.