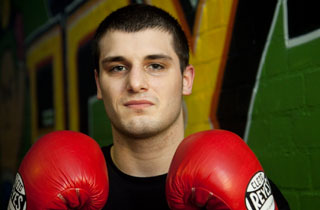 Dennis Hobson believes Liam Cameron will become the new Commonwealth super-middleweight champion if he boxes with confidence against Luke Blackledge on April 4.

Cameron and Blackledge clash at Blackburn’s King George’s Hall for the vacant title, in a fight shown live and free on vipboxing.tv.  And the Sheffield fight-maestro is predicting an entertaining scrap and an away-from-home victory for his fighter.

“It’s a great match up,” explained Hobson, who manages Cameron.  “It’s a 50-50 fight, but I’m quietly very confident.  If the ‘right’ Liam Cameron turns up then he’ll win because ability-wise, Liam is ahead.  Luke is game; he comes to fight and is brave as anything but you’re only as good as the other man will let you be.

“The styles will mean it’s a very good fight to watch.  It’s a contest I’d have been pleased to put on but because of the time restraints Steve Wood [VIP Promotions] was able to make the fight.  I like to have my boxers fighting at home but sometimes you take a calculated gamble because you think they can win, and that’s how I feel about this situation.”

A former ABA champion, Cameron is in line for a British title shot after a December eliminator victory over Welshman Tobias Webb.  Touted as a future star when he turned pro in 2009, the Steel City fighter has lost three of 21 outings but appears back to his best after reuniting with trainer Chris Smedley.

Blackledge has fought for the Commonwealth strap previously, losing in a round to Rocky Fielding in 2013.  Since then the aggressive Accrington fighter has changed trainers and, now under the tutelage of Alex Matvienko, heads into the fight with home advantage and just a brace of defeats on his 22-fight ledger.

“Liam moved away and changed camps a while ago, but saw the grass isn’t greener and he’s back performing well now,” continued Hobson.  “We’ve got him this opportunity and he should be mature enough to take it, but he has to be mentally strong enough as well as physically.  If Liam doesn’t turn up then Luke has a chance, but if Liam is on his ‘A-game’ then there’s only one winner.”