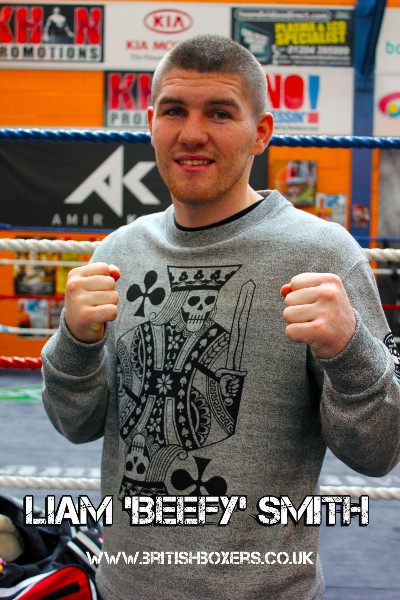 Liverpool hot-shot Liam Smith will face Argentina’s David Ezequiel Romero for the Vacant WBO Intercontinental Light-Middleweight Championship on Saturday 18th April at the Echo Arena as he closes in a world title shot.

Unbeaten Smith features as chief support on a huge night of fight action on Merseyside with Derry Mathews challenging for the WBA World Lightweight title against champion Richar Abril, live and exclusive on BoxNation.

The 26-year-old, a former Commonwealth Champion and the current British Champion, is rated at number seven in the WBO world rankings – and also at number five in the IBF – knows a win could elevate him into the top three as he targets American WBO ruler Demetrius Andrade.

At 22, Romero, from Buenos Aires, is a young and ambitious challenger who will be looking to cause a big upset by defeating Smith in his home city.  He halted Luis Alejandro Tejerina in seven rounds to claim the Vacant WBO Latino title last month and will be looking to do a repeat job on Smith.

However, Smith, who has destroyed his last four opponents in row – says he’ll be too sharp for the Argie on the night and aims to cut him down inside the distance to remain on course for his world title dream.

“This is another step closer towards my world title shot and Romero is in my way,” Said Smith.

“I’ve come too far and achieved too much to let it come to an end on Saturday 18th April at the Echo Arena and Romero is going to have to be knocked out,”

“Every single fight in my career is important, but now as I’m getting closer to the top of the mountain and Andrade is getting more into my sights, these fights are absolutely crucial to win or I’ll come crashing down the mountain, but I won’t let that happen,”

“The WBO Intercontinental title is an important one and winning it will push me into at least the top three of the 154lb division, that’s a big motivation for me to make sure I beat Romero,”

“I’ve seen some of Romero fights, he’s a good, strong, game kid, pretty wild with some punches, who will come over here looking for the upset.  He’s just won the WBO Latino title and he’s got his own aspirations of fighting for a world title but there is no way I’ll let him get any ground in the fight, I’ll be all over him.”

BoxNation will televise live and exclusive on Sky 437/HD 490, Virgin 546 and Talk Talk 525.  Subscribe at www.boxnation.com  Or watch online at Livesport.tv and via iPhone, iPad or Android.