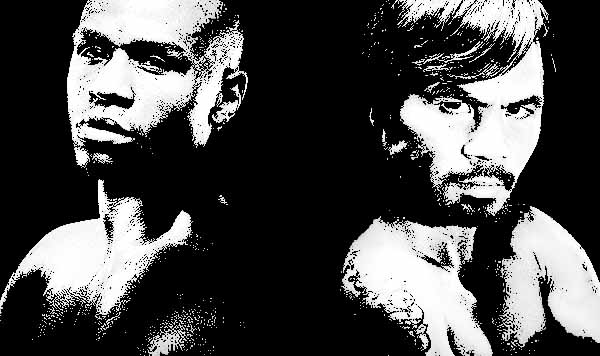 MAYWEATHER VERSUS PACQUIAO: A PREVIEW

When the long-anticipated superfight between Floyd Mayweather and Manny Pacquiao was announced for May-2nd, many of us had long abandoned any hope we might have had of that fight taking place. There were just too many impediments to this fight, it seemed. The prospect of a compromise between the two rival gargantuan networks (HBO and Showtime) as well as an agreement between the vociferous Bob Arum and the shadowy Al-Haymon – two committed promotional adversaries – seemed virtually impossible.

But it has happened. As unfathomable and fantastical as it once seemed, interviews have been conducted, multimillion-dollar contracts have been signed, and it has been officially confirmed that the undefeated Mayweather will face Pacquiao in approximately a months’ time at the famed MGM-Grand Garden-Arena in Las Vegas, Nevada – the fight capital of the world.  Boxing-fans still had to pinch themselves when they saw the two fighters facing off at the showy preliminaries outside the Nokia-Theatre in Los Angeles – scenario they had visualised for half a decade. It was a bizarre thing indeed to see this fight finally materialised after five excruciating years of prevarication and finger-pointing from both-sides’ respective camps.

Even the profoundly egotistical American was able to appreciate the magnitude of the occasion. A visibly-emotional Mayweather acknowledged the immeasurable hype surrounding this fight in his comments at the press conference. Bob Arum certainly did and somehow found himself launching into a melodramatic, sentimental monologue regarding the imperialist-Japanese occupation of southeast-Asia during the Second World-War. Boxing-fans worldwide, as well as the assembled media personnel, were left scratching their heads at this spontaneous outburst. But anyway, the question that has been on everybody’s lips is quite simply: who’s going to win?

It is true that Mayweather, a celebrated counter-puncher, has comprehensively outboxed and outfoxed opponents who arguably have possessed attributes superior to his at the time of fighting, such as toughness (Arturo Gatti), power (Marcos Maidana) and speed (Zab Judah). Consequently, this has led many to suggest that in addition to flaunting his undefeated record, the 38 year-old native of Grand-Rapids, Michigan is effectively undefeatable.

But someone like Manny Pacquiao, who is potentially superior in all three of those aforementioned departments combined, may present a formidable challenge to Mayweather’s supremacy and an existential threat to his undefeated record. Many have speculated this was the reason why the fight hasn’t taken place until now. But this fight wouldn’t have materialised unless Mayweather, who was particularly enthusiastic regarding the prospect of fighting Pacquiao several-months’ ago, was definitely confident of victory.

Below is an extensive analysis on the triumvirate of these attributes (toughness, power and speed) and the degree to which Pacquiao is superior in these particular categories:

Mayweather has never been knocked-down, let alone knocked-out in a professional career spanning nearly two decades. However, this is largely in part due to the fact that he rarely gets hit hard at all, because of his consummate defensive capabilities. Nevertheless, he has displayed a tremendously sturdy chin when it has been on the receiving end of powerful shots from the likes of Shane Mosley and Marcos Maidana, but fans ultimately do not know enough about Mayweather’s chin to ascertain whether it is superior to Pacquiao’s. Nevertheless, it is an element that Mayweather would prefer to leave out entirely – he would much rather it be the case that his chin doesn’t get tested, at all.

Conversely, Pacquiao has cultivated a reputation as being a tough, resilient and hearty combatant which has been clearly exemplified in his triumvirate of bouts with Juan Manuel Marquez (despite his devastating knockout at the hands of the Mexican in their most recent fourth encounter); his triumphs over Joshua Clottey, Miguel Cotto and Shane Mosley; and his emphatic obliteration of the intimidating Antonio Margarito in 2010 – despite the disproportionate differences in size between the two. It is unquestionably the case that Pacquiao can take a punch, and a hard one at that. Incidentally, this is something that his longtime adversary Marquez has attested to in an interview prior to their third fight. So in determining which one of the two is tougher, you would be inclined to edge towards Pacquiao.

Despite being primarily what you would define as a methodical, exacting “pot-shotter” when on the offensive, speed is an indispensable component of Mayweather’s defence. Mayweather’s reflexive parries and instinctive movements leave his opponents dumbfounded and spectators awestruck. His “old-school”, “shoulder-roll” technique previously employed by James Toney – have been emulated by talented prospects around the world, from the astonishingly-talented Guillermo Rigondeaux to the flamboyant, entertaining pretender Adrien Broner.

Meanwhile, speed is arguably Pacquiao’s most famed characteristic. He often endeavours overwhelm his opponents with perpetual-motion and inundate them with lots and lots of punches. Pacquiao throws blistering combinations that pulverise his opponents, leaving them looking positively flustered and wondering what the hell had just happened to them at the end of the round. Unlike his counterpart, Pacquiao primarily relies on voluminous punching through scintillating, eye-catching combinations to captivate the audience and most importantly, to impress the judges. The element of speed in this fight is therefore something most will associate with Pacquiao.

Pacquiao’s clinical evisceration of English challenger Ricky Hatton within two rounds probably scared the living daylights out of every other boxer in the light-welterweight division, particularly when taking into consideration that it took Mayweather ten ponderous and frustrating rounds to do the same a year earlier. Pacquiao was renowned for his concussive punching-power at the lower-weights, and he has still retained his explosive quality somewhat with six knockdowns scored against light-welterweight champion Chris Algieri several months ago in Macau, on the way to a resounding unanimous-decision victory. But the overabundance of resounding unanimous-decision victories throughout his recent fights (as opposed to devastating knockouts) have led many commentators and neutral-observers to suggest that Pacquiao’s power is either rapidly declining, or not as effective at 147lbs as he would like it to be. Ultimately, the fact that Pacquiao hasn’t won by stoppage in over five years notwithstanding, it would be safe to assume that Pacquiao still possesses considerable power and is capable of hurting his opponents.

However, Mayweather is also capable of hurting his opponents and severely undermining their ability to fight effectively towards the latter stages of the fight. This is accomplished through a combination of their eexasperation at not being able to land – and the cumulative effects of his exquisite counter-punching. Mayweather’s systematic dismantling of his opponents was most noticeably exhibited in his five-round whitewash of Arturo Gatti, and in his 2012 superfight against Miguel Cotto, where the Puerto-Rican was visibly wobbled by a choice uppercut in the final round. Regardless, there is a general consensus among pugilistic aficionados that Pacquiao hits the hardest out of the two fighters.

If Pacquiao wins it will be because of:

The numerical disparity in the quantity of punches landed respectively between the two fighters. Pacquiao will adopt an unorthodox strategy, throwing blistering combinations and moving quickly out of the way to ruffle Mayweather’s feathers.

If Mayweather wins it will be because of:

Mayweather’s size, strength, and physical advantages, coupled with Pacquiao’s exhaustion towards the latter stages of the fight. Pacquiao’s unremitting aggression throughout the early rounds will be commensurate with the tactics employed by many of Mayweather’s previous opponents, and his inability to penetrate Mayweather’s impregnable defence will cause him to effectively punch himself out and allow the American to dominate the later rounds.

Pacquiao would be best advised to be as unorthodox and unconventional as possible in his strategic approach to this fight, by fully utilising his southpaw stance, throwing fast combinations and then undertaking evasive manoeuvres to ostensibly outland, outwork and outscore the undefeated champion. By defying all preconceived expectations of his tactics, Pacquiao could potentially force the primarily defensive-minded Mayweather to come out of his comfort-zone and walk the Filipino down, rendering him vulnerable to more dangerous shots in the process and providing Pacquiao’s with opportunities to hurt Mayweather.

Despite all the abovementioned factors, Pacquiao’s unbridled determination to win at all costs frequently renders him more predisposed to fighting, as opposed to boxing. When frustrated, Pacquiao is exceedingly likely to abandon a prospective strategy devised by his cornermen and recklessly hunt for the conclusive knockout vcitory. When faced up against a belligerent, confrontational and traditional ‘bully’ fighter who seeks to pressurise, Floyd Mayweather is undoubtedly in his element – particularly when taking into consideration that he is arguably the most competent inside-fighter and counter-puncher in contemporary boxing. Mayweather has reportedly been training extensively on body-punching, and this is additionally something that could possibly enervate Pacquiao as the fight progresses.

Furthermore, Pacquiao’s unrelenting aggression throughout the initial proceedings may cause him to tire from the midway point onwards. Subsequently, this will allow Mayweather – someone who is adept at conserving energy and pacing himself throughout fights – to therefore capitalise and land accurate, precise counterpunches as the fight approaches its inexorable conclusion. Moreover, Mayweather’s proficiency in fighting on the inside may also enable him to stifle Pacquiao’s assets: by utilising his superior physical dimensions, Mayweather may be able to smother Pacquiao in the later rounds to effectively secure a points-win.