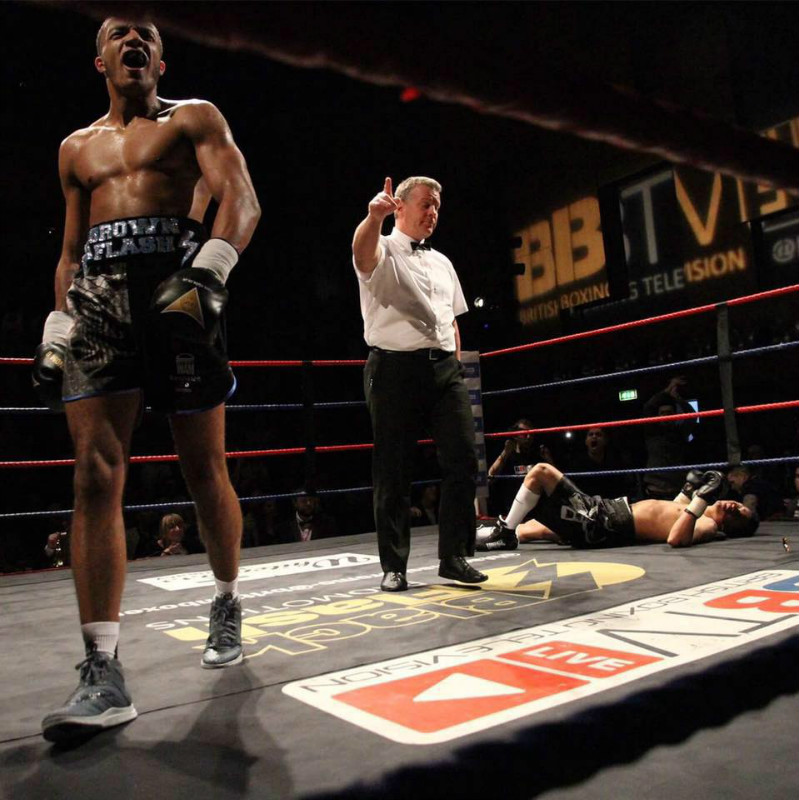 Rising star of British boxing Zelfa ‘Brown Flash’ Barrett will headline at the Bowlers Arena (BEC) in Manchester on Saturday July 29th, which will be covered by BBTV.

Barrett, 23, now unbeaten in 17 fights, 10 wins coming early; is regarded as one of the brightest young prospects in the sport and again goes back to his routes on a Black Flash Promotions show in his home town, where he leads a stella cast of local rising talent, titled ‘Manchester Young Guns’.

The show is also to celebrate the 100 year anniversary of the Collyhurst and Moston Boxing Club, the club that Black Flash was formed for, to help the millennium crop of new professionals from the famous gym in Moston get their careers off the ground.

Barrett who is on the brink of a domestic title shot, will contest a 10 rounder against an opponent yet to be confirmed, but who is expected to be a step up and test for the Mancunian talent. In his last outing in May, live on BoxNation and BT Sport, Zelfa shown a wider audience just what many have been whispering around the gyms of Manchester the last few years; ‘This kid is something a bit special!’ – His opponent was the teak tough experienced Spanish based Nicaraguan Eusebio Osejo and put on a measured display of intelligent boxing and shown a respectful use of power again. He outboxed and dropped Osejo twice on his way to a convincing points victory. And on this special night for the club he has been at since a child, Zelfa says he will put on another great show and will again show something new to his ever increasing arsenal.

“This show will be special and I cannot wait for it, and to be headlining is fantastic.” Barrett told British Boxers.

“To be part of a club with so much history and tradition and now to be part of the new generation of professional to come from this great gym, makes me proud and humble to know that there are so many great fighters who have gone before me and up-held them traditions. Quality champions have come from this gym, the likes of my uncle Pat (Barrett) Robin Ried, Mike Jennings, Thomas McDonagh, Arnie (Anthony Farnell) Michael Gomez, Matty Hall, Scott Quigg and recently Matthew Ryan has just won the English title and we will continue to the flag for the gym and for Brian Hughes, who is responsible for making the club the fight factory it became and still is.”

Barrett knows he is now on the cusp of championship fights and with the talk of English, British, Commonwealth and International title fights on the cards, the unbeaten super-featherweight is keen to keep his feet on the ground and continue to perform and beat whoever is put in front of him. “When I say I will fight anyone, I mean it.” added Barrett.

“I’m sure most boxers enjoy the competition side of the sport and testing themselves against the best, well that is my mentality to boxing. I want to face the best boxers around and test myself, my skills, earn my right to be a champion by beating the best fighters, starting domestically.

“I have a team of people around me and advise my path to the best of their knowledge, so I come along at the right pace. So when I fight for titles, I win them and keep them. My ambition is to be an undisputed world champion, be recognised in boxing history as a great boxer who took on and beat all comers.

“I hope that doesn’t sound big headed or anything but I believe to be the best at something you have to believe one hundred percent in it with a passion and I fully believe in myself and my dream. I hope everyone can make it to my next fight at Bowlers, it will be a great night, I can’t wait to put on a great performance for everyone.”

Also appearing on the bill….

Light-heavyweight, former GB member Arthur (6-0, 5KOs) is making big waves in the light heavyweight division in the UK and has been touted for big things. In recent performances Lyndon has looked classy and well-schooled but is also developing a reputation as a bruising puncher to body and head. Lyndon has stopped durable opponents such as Elvis Dube and Mitch Mitchell in style: “I am really happy with the speed my career is moving at.” – To be part of the journey make sure you tune in on the 29th July to see what all the fuss is about.

Super welterweight prospect Chris Monaghan (6-1-1) is a fan friendly switch hitter with a good following and a style which makes for exciting fights. His one draw came to former gym mate Sam Omidi in what many have remarked as one of the best 6 rounders they have seen at a small hall show. Monaghan is guided by Pat Barrett and Paulie De Silva and fights out of the Collyhurst and Moston Boxy Gym alongside two other men on the bill in Zelfa Barrett and Lyndon Arthur. At a crucial stage in his career Chris, 26 is now looking to push on and carve out a route to titles. “I’m fit and ready, I can make fights easy for myself but I like to fight”

Now campaigning at middleweight, Denton Vassell (23-4, 11KO) makes his return to the ring after not fighting since April 2016. Denton is a former Commonwealth champion who has been in the ring with some of the best domestic operators around. Once tipped as one of the UK’s brightest prospects, Denton who now trains at Oliver Harrison’s Gym in Salford is ready to get back in the mix.

Light heavyweight Jake Haigh (4-0, 2KO) is definitely one to watch. In his last outing on a Black Flash Promotions show, the Macclesfield man took on Lincoln’s Mitch Mitchell at the Middleton Arena in Manchester on May 27th 2017.Haigh took the victory on points, with referee Darren Sargenson scoring the bout 40-35 in his favour. The commentary team showered him with praise and for good reason. A well-schooled and heavy handed young gun with bags of potential. Trained at the Hatton’s Gym and watched closely by Blaine Younis and Ricky Hatton in particular, Jake has all the tools to become a star.

Dean Laing is set to make his professional debut with Patt Barrett and Paulie De Silva. Patt Barrett is a man who needs no introduction in British Boxing as a former British and European Champion. He now runs the professional boxing set up at the Collyhurst and Moston Boxing Gym established by Brian Hughes. His newest signing Dean Laing, who currently lives in Wallsend in Newcastle upon Tyne, is ready to turn over with Pat after a promising amateur career. Dean has a steely determination and appears to be focused and relishing the challenge of turning over with the Collyhurst and Moston Boxing Gym.

Super-welterweight Arthif Daniel (6-2) is a professionally trained dentist. In one interview he kindly offered to repair any dental work required to his opponents who suffer teeth injuries in the ring with him. Daniel has trained with Amir Khan and Floyd Mayweather is known as “Doctor Hitman”. He has also recently had Errol Spence Jr over to use his facilities whist training for the Kell Brook fight. Daniel is serious about the fight game and leaves no stone unturned in training, we look forward to his maiden fight on a Black Flash Promotion.

Michael Ramabeletsa (15-16, 6KOs) aka the “Trouble Maker” is a talented and skilful Super bantamweight from South Africa but now calls Preston in Lancashire his home. The 35-year-old, who made his first UK appearance in 2011 against world title challenger Martin Ward, has been in with some very good boxers. He has shared the ring with people like former world champion Paul Butler and current WBA World super flyweight titleist Kal Yafai. Taking a lot of big fights at short notice, and in defeat he has always given a very good account of himself. Ladt time out he lost a very narrow decision to Josh Kennedy for the English Title after flooring Kennedy in the middle rounds of the fight. This flashy fighter is certain to entertain.

More fights to be confirmed for the card… plus a host of special guests in attendance.

Proceeds from the show will go towards the Collyhurst and Moston Boxing Club. To buy equipment and a minibus for the amateur team.