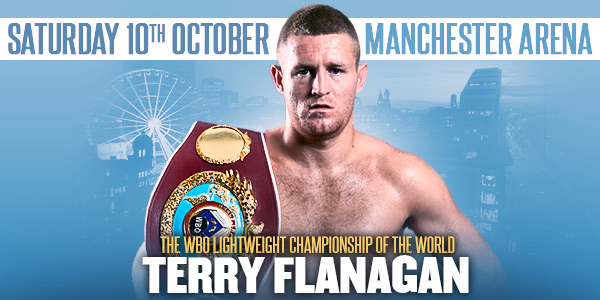 Britain’s premier lightweight Terry ‘Turbo’ Flanagan is set to make the first defence of his WBO world title on a blockbuster card on Saturday 10th October at the Manchester Arena.

With Manchester recently named as the greatest sporting city in the UK, the undefeated 26-year-old will put his belt on the line in front of his hometown fans following his sensational achievement in becoming Britain’s first ever lightweight world champion with his victory over the tough Jose Zepeda last month.

With a record of 28-0, Flanagan has steadily risen through the 135lb division and has cemented his name amongst the top tier which includes fellow world champions in the WBC’s Jorge Linares, IBF titleholder Cesar Cuenca and WBA champion Darleys Perez.

The slick southpaw has drawn comparisons with fellow Manchester City supporter Ricky Hatton and showed the same steely disposition as the boxing legend in his first world title fight when proving he was unfazed at fighting on the big stage against Zepeda.

Former undefeated British lightweight champion Flanagan will now be looking to showcase his exciting set of skills once again as he steps back between the ropes on October 10th in a night which he is aiming to make just as memorable as his world title victory.

“Manchester is the best city in the world and to be crowned world champion in my home city was the best feeling ever,” said Flanagan. “It’s the UK’s number one sporting city with the best footballers, cricketers, rugby players and of course boxers.  Making history and becoming the first ever British lightweight world champion is something which means a lot to me. The support in Manchester was unbelievable that night and I have no doubts that October 10th will be an equally special occasion. I’m going to put on a thrilling show for my fans and it will be a night to remember.”

Promoter Frank Warren said: “I have always held Terry in the highest regard and I know he is ready to prove himself amongst the very best in the lightweight division. His victory over Jose Zepeda is only the start for him and he will be looking to kick on and make some big waves at 135lbs. He has the world at his feet and on Saturday October 10th his journey will continue as he steps back in with another live and dangerous opponent who will be looking to cause an upset in front of Terry’s home supporters at the Manchester Arena. It’s going to be a truly fantastic fight card and alongside Terry’s first defence will be a number of top class fights.”