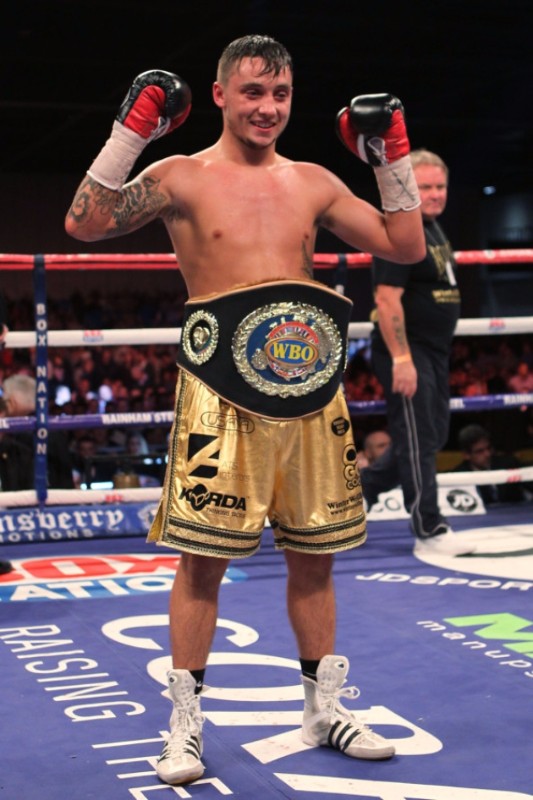 Mitchell Smith has his eye on Josh Warrington

Mitchell Smith looks to be coming out all guns blazing as he has promised to ‘hit Josh Warrington at will’ if he successfully grabs a chance to fight against the European and Commonwealth featherweight champion next year.

The last 12 months has been impressive for Smith as the The WBO European and Inter-Continental super-featherweight champion was recently named Boxing Writers’ Young Boxer of the Year which is a great look for the Harrow fighter.

Smith faces George Jupp in a rearranged contest next month, but he plans to step down to featherweight in 2016 and the 22-year-old has his sights set on fellow undefeated fighter Warrington.

The young prodigy has been quoted as saying “I’ll be looking to have my first fight at featherweight in early January. It’s time for me to take that step now,”

“I’d love to fight Josh Warrington but let’s be honest he’s not going to take the fight. I’m all wrong for him as a fighter and I would hit him at will. It would be like hitting a punchbag that has a guard and as soon as I get through that guard I’ll be doing some serious damage.

“It’s not worth talking about right now but fingers crossed in time it will happen. There’s an interesting rivalry there that’s building up nicely and hopefully at some stage we can get it on for the British public because they’d love to see that fight.

“If I keep on winning and he keeps on winning then it’s a fight that could earn us both a lot of money in the future.”

Since beating Joel Brunker last month via a points decision, the man from Leeds has turned his sights to challenging Welsh IBF champion, Lee Selby, for a world title next year.

But Smith insists a fight against Selby who makes the first defence of his IBF Belt early on Thursday morning in Arizona would be a recipe for disaster should Warrington take the fight.

Smith went onto say “That would be absolutely suicidal. He hasn’t got it in him to lace Lee Selby’s gloves,”

“It would be an easy fight for Lee and if I was him I’d be rubbing my hands together. Josh would get schooled. He’d get stopped inside five or six rounds because Selby is a very good fighter.”

Another fighter on Smith’s radar is Ryan Walsh, who claimed the vacant British title with a points win over Hull’s Samir Mounemnie at Wembley Arena last month.

“I’m hungry to face Walsh especially because I thought he was very fortunate to get a decision against Samir,” Smith said.

“We’ve had a bit of needle on Twitter but lads like him would only last five or six rounds with me. There is no way in a million years Ryan Walsh could beat me and I can’t wait to get it on with him.”