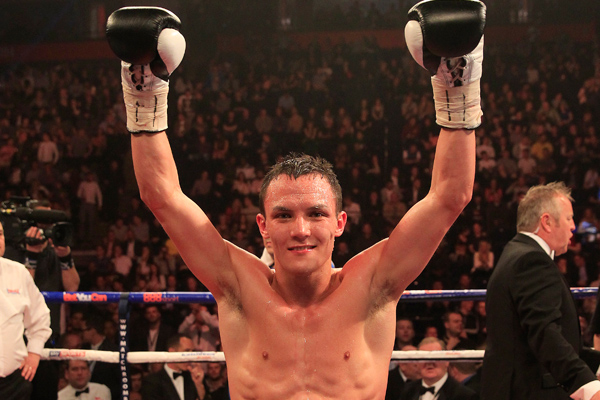 Josh Warrington admits he is thriving on the pressure of his clash with Joel Brunker at the First Direct Arena in Leeds on September 5, live on Sky Sports.

Warrington, (pic above) who enters the fight with a perfect 21-0 record, is aiming to defend his WBC International and Commonwealth Featherweight titles against the 29 year-old Australian.

Brunker returns to the UK for his first bout since losing to Lee Selby in an IBF world title eliminator at the O2 Arena last October – his first professional defeat.

Selby went on to rip the World crown from Evgeny Gradovich in May after stopping Brunker, and with Warrington having picked up the British, European and Commonwealth titles vacated by the Welsh wizard. The Leeds star knows that his performance against Brunker will be heavily scrutinised – and the 24 year old says that pressure will translate into a dazzling performance on the night.

“I need to prove I can mix it with the likes of Joel Brunker so I can show that I am ready to take the next big step to a World title,” said Warrington. “I’ve been asking more of myself in training because I know I cannot go in there a 99 per cent – I have to be 100 per cent to beat him.

“The next belt in my progression is the World title. There’s no point me kidding myself and boxing tin cans, I have to be boxing people like Joel, He is coming over to prove he is a World class fighter and he’s going to bring everything he’s got no September 5. You don’t get a record like Joel’s without being a quality fighter. He’s got a great work rate, he throws a lot of punches and he’s definitely the biggest name on my CV.

“Lee fights differently to how I do so we can’t read too much into that fight. My Dad will watch him and come up with a game plan. Joel will turn up with a different game plan to fight me too, so I just need to make sure that I am fit as can be and stick to the plan.

“I’ve come a long way, the more the profile rises, the more the pressure rises. I am loving that pressure though and I am using it as fuel in the gym. People are coming up to me in Leeds and asking me ‘when are you going to fight at Elland Road?’ I say to them that a fight there doesn’t happen if I don’t beat Brunker and the next test after that, so come to the Arena on September 5 and be part of the journey now, part of what we want to achieve for the city.”

Warrington’s clash with Brunker is part of a massive night of action in Leeds as Martin Murray takes part in his first championship bout since challenging Gennady Golovkin for the World title, this time up at Super Middleweight.