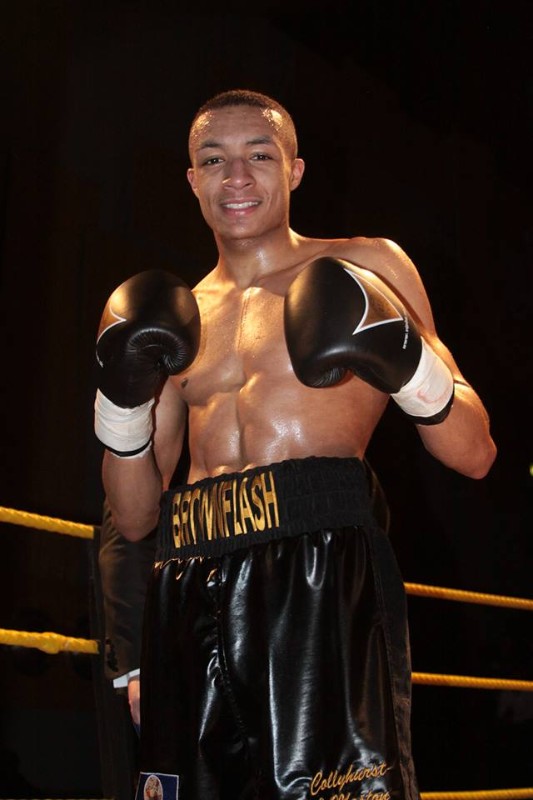 It’s now nearly a year that rising Mancunian super-featherweight Zelfa ‘Brown Flash’ Barrett has been a professional boxer. He made his debut at the Middleton Arena last October with a neat, dominating points win over the experienced, battle hardened Kristian Laight. He has since racked up another four wins including a knock out of the usually durable Joe Beedeon in one round and he then faced a live opponent in local former amateur rival, the tough Jamie Quinn twice, scoring two points wins.

In his last fight, Barrett easily outpointed Ibrar Riyaz and is set to have his 6th pro fight this Saturday night in Liverpool on the undercard of Stephen Smith’s world super-featherweight title eliminator against Devis Boschiero at the Olympia. Barrett will take on Sheffield’s Qasim Hussain over 4 rounds as he travels for the first time to fight out of Manchester as a professional. The Flash is making a name for himself on the scene and the experts and boxing heads are starting to take a closer look.

After Saturday, Barrett is then set to appear on October 31st in Bury on his promoter’s latest Black Flash Promotions bill, ‘Fright Night’ that will be Barrett’s 7th fight in his first year as a pro, a good return for any new prospect looking to keep busy and make his way in the ranks.

“I couldn’t ask for anything more and I am delighted the way my professional career has gone since turning over.” said Barrett who has gone about his business admirably, taking to the pros like a duck to water.

“I haven’t stopped training or preparing to have a fight since having my debut against Laight, because after every fight I’ve had, I’ve had another one already set up, thanks to Black Flash Promotions I’ve been able to keep active and that is important for any young boxer at the start of their career, I’m blessed that I’ve been able to gain the early experiences and by the end of the year I could be 8-0 if I can get another fight in for December, Id love that. added Zelfa.

Barrett virtually lives in the Collyhurst and Moston Gym where he is trained by his uncle Pat Barrett, the former British and European champion, who is also his promoter. Zelfa has been going to the gym with Pat from being a baby and started properly boxing when he was 8 years old, he has barely left the building since then.

“If he isn’t training, he is watching the other lads train or helping them out, if he isn’t doing that he is sat in the gym office watching boxing videos or the film of the days training, we have cameras set up on the ring and the gym so we can play it on the TV and watch the sparring and technical work back,  Zelfa is not short of commitment! continued Pat. “He is focussed on where he wants to get and that is to be a long reigning world champion.

“If hard work and dedication is the key to success, he has that in abundance, that coupled with his skill set and willingness to improve all the time, he has everything going for him to make it and fulfil his dreams and ambitions.”

Zelfa will be likened and judged maybe by some, on his uncles career and past achievements, but Pat believes Zelfa is a better all round boxer than he was. “If I had the skills that he has, I would have been a multi world champion.” Barrett went on. “Later in my career I lacked the dedication I had earlier in my career and that can be a problem with many boxers. If Zelfa sticks to what he is doing now, continues to learn, listen and improve he will be one hell of a fighter and can do whatever he wants to do in boxing.” added Barrett.