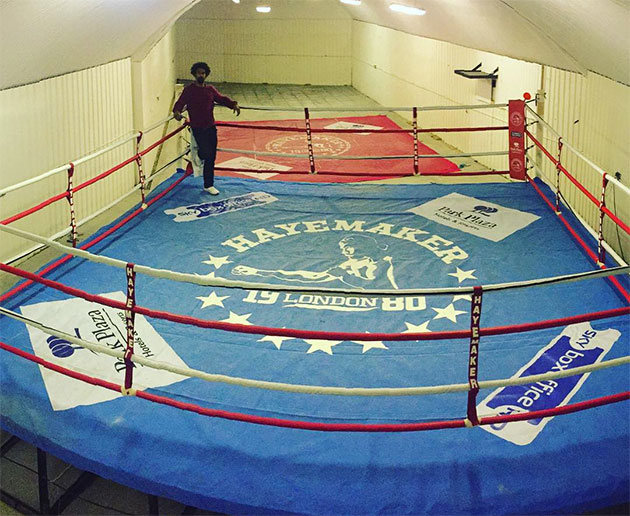 Could this be the end of David Haye as a boxer?

David Haye the former heavyweight world champion has closed down his Hayemaker gym and is selling the boxing ring on eBay.

The 35-year-old from South London has not been active in the ring for over 3 years since the summer of 2012, although he says he is planning to return to action at some point.

However, strangley the Hayemaker has dismantled the South London gym which he used for 6 years under the railway arches in Vauxhall.

Astonishingly the ring from the gym has been put up for auction and has been doing its rounds on ebay where bidding had almost reached £40,000 on Thursday morning.

Haye has been quoted on Facebook as saying : “I’ve just deconstructed the Hayemaker ring, it’s a pitiful sight.

“So much has happened in it. [Preparing for fights with] Valuev, Klitschko, Harrison, Ruiz, Chisora; all the blood, sweat and tears from my heavyweight career.”

Haye became the world cruiserweight champion 8 years ago who reached his dream in 2007 and then moved up to heavyweight, winning the world title when he beat the tall monster of Nikolay Valuev on points in November 2 years later, which was built as David Vs Goliath.

However after reigning victorious with a pair of successful title defences, the South Londoner went onto challenge the almighty Ukrainian Wladimir Klitschko where he got out classed and lost on a unanimous decision out in Germany.

Haye went onto defeat British rival Dereck Chisora at Upton Park in a dramatic frenzy in 2012 where he managed to knockout his foe, but since then has since pulled out of 3 planned fights with Manuel Charr and Tyson Fury (twice) due to injuries.

Would you like to see Haye ever fight again?

Can the Hayemaker ever be a force again in Boxing?