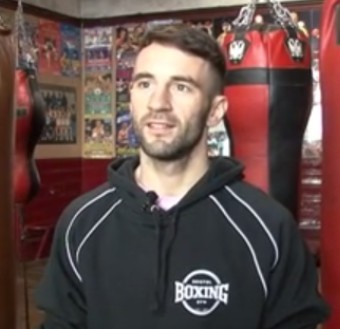 Haskin’s, 32, set up this chance after he claimed the interim belt in June by stopping Japan’s Ryosuke Iwasa.

The Bristol man , one of the most naturally gifted British boxers, turned pro in March 2003 and is a former British, European, Commonwealth and International belt holder and deserves his crack at world glory. Haskins says he has dreamed of fighting in Las Vegas all his life and cannot wait for his debut in what he describes as the magical” home of boxing.

“It’s a magical place for boxing and it’s a place where every boxer wants to fight at least once,” Haskins told BBC Radio Bristol.

“I’ve got an opportunity to fight over there which is something I will have for the rest of my life and something I can share with my grandkids.”

Caballero has not fought since October 2014 because of injury and Haskins, who will head to the United States on 3 November to acclimatise, is relishing the opportunity.

“The amount of training to do is very daunting to me and I still have got a lot of work to do before I see light at the end of the tunnel.

“Just to stand there and win a world title will be worth it. Those belts are what dreams are made of and something I’ve always wanted, now the opportunity is here in front of me,” he said.

“I know how he boxes, he is a tough guy, young and to be a world champion at his age he must be talented,” added Haskins.
“We know it’s going to be a tough fight and I’m going to have to produce my best on the night.” added Haskin’s about Caballero, 25, who is unbeaten in 22 fights and beat Stuart Hall last year to claim the vacant IBF belt.

“This will be my toughest fight and I’m prepared to walk through the fiery depths of hell for this fight.”