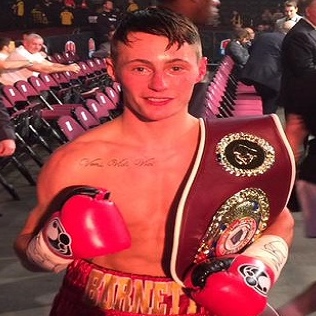 The talented 23 year old showed his growing maturity in the ring and patiently walked his opponent down in the second round before unleashing a powerful right hook to send the Hungarian fighter reeling to the canvas. After two further visits to the ring cloth in the round by Kanalas the referee waved the fight over.

Burnett relocated to London a year ago to the Booth Boxing Gym where his boxing skills have been honed by renowned boxing trainer Adam Booth. This is their seventh straight win together.

The talented North Belfast fighter has a bright future ahead of him in the sport and has the talent to rise to the top with dedication and hard work.

After the fight speaking from the ring apron, the Irish fighter was ecstatic with his win ‘I am over the moon to win my first title belt, boxing is my life and winning titles is my goal. They are the trophies of success.’

’I am a young fighter and I am learning in every fight and in the gym. I have won 11 out of 11 fights, which have been a good foundation for me in my career, so I am now ready to step things up a level and test myself.’

That test will come next month, when Burnett will trade punches with veteran fighter Jason Booth for the vacant British Bantamweight Title on 23 November 2015 in London.

Adam Booth commented ‘Ryan put on an impressive performance this evening and was patient in going about his business. He is out again next month against a seasoned and experienced professional in Jason Booth.’

‘Ryan’s natural strengths are he is very quick, he’s very strong and he’s very clever and they’re not bad ingredients to be working with.’

“Punching power is a combination of speed, strength and technique, and he has the speed and the strength, so the technique is my responsibility.’

Burnett and Booth have developed a strong bond and working relationship and have found a winning formula together.

The successful and legendary boxing coach, Eddie Futch once said ‘Boxing is a science. You don’t just walk into a gym and start punching. Fighters are born with differences in physical ability, but you also see a big difference in their skills. That’s the trainer’s influence at work.’