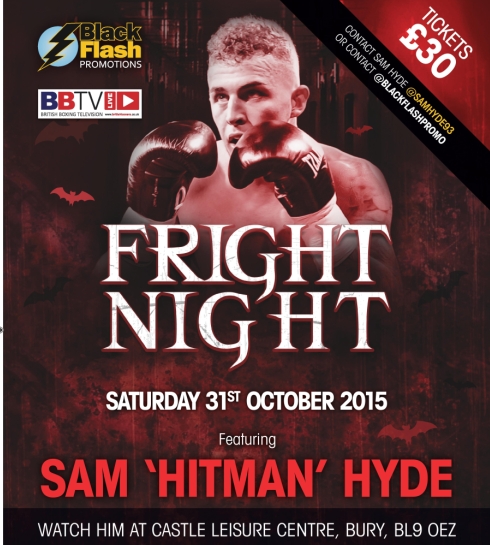 Unbeaten cruiserweight prospect Sam ‘Nowhere2’ Hyde hopes to have an Halloween Night to remember when he takes on Northern Ireland based Ugandan Moses Matovu at the Castle Bury Leisure Centre on Saturday October 31st.

The big Halloween show aptly named ‘Fright Night’ is the latest professional outing of Black Flash Promotions who have recently done a deal with Hyde to feature him on some big upcoming shows in 2016 as well.

A very good amateur, Hyde is a product of the same gym in Manchester, Sale West ABC, that Ricky Hatton started his career at, and he hopes to trail blaze Hatton to world title honours.

Hyde, 21, has so far put together a record of 4-0-1, 1KO, the only blip a draw against Wayne Brooks. Even though Hyde believes he did enough to win it over four rounds, he puts that fight down to a big learning experience. He went in under trained and unfit and nearly paid the price and since then has taken things more seriously and professionally knowing he is just one fight away from undoing all his hard-work.

In this video interview, Sam, who trains at the famous Champs Camp gym in Moss side Manchester under former champion’s Ensley Bingham and Maurice Core, speaks about his career as a pro, his training camp, looks to the future and his hopes and dreams of making it to the top. Includes training and sparring footage.

For tickets to Sam ‘Hitman’ Hyde’s next fight contact: @SamHyde93 or @BlackFlashPromo

The Fight will be broadcast LIVE, Exclusive and FREE to watch on British Boxing TV (BBTVLIVE) at www.britishboxers.co.uk

Sam started boxing when he was 14 at Sale West Amateur Boxing Club, then run by the late Paul Dunne. He had his first fight at 15 in Nottingham, winning by knockout in the 1st round 1 minute in. He then won 6 more fights on the trot by Knockout/stoppage.

Sam then found it difficult to gets fights due to his record. Sam had 12 more fights after this, winning 8 of the 12. Sam has only been beaten on points once in his whole amateur career and that was a split decision. In 2011 Sam had a good year, fighting Danny Green who recently stopped a good prospect from Sam’s gym who was 2 years older. He got stopped in the second round. Sam fought him, and stopped him in the second round. Sam then won the Junior ABA title at 91kg. On that performance he was selected for England in the Tri-Nations against Scotland and Wales. Unfortunately both country’s pulled out.

Sam then won the CYP championships at 91kg winning both fights by unanimous decision. He was awarded Ex Boxers boxer of the year for his success. After 3 years, I decided to change gym’s to Gary Booth’s Boxing Academy in Irlam as I was only training 2 times a week. Sam got picked to fight for the North West in Isle of Man. Sam beat Danny Linehan, a good prospect by unanimous decision getting ‘Fight of the Night’. Sam was then selected for GB assessment. Sam didn’t get on, and he knew his style was not amatuer at all. Sam then entered Sweden’s Box Cup at 91kg. There were 7 entries where Sam boxed an undefeated local star, Robin Safar. He had won most fights by knockout. In his next fight, Sam then fought another local fighter, knocking him down 3 times before the referee stepped in for a first round stoppage.

Sam then had few a more fights and made the decision to change gym as he felt he wasn’t working technical enough. Sam went to Champs Camp to try out, and Ensley Bingham took a liking to him and told him ‘his style is built for this, and he would train him’. Sam was a bit fed up with the amateur game as he had lost hope in any Olympic dream and needed a new goal. Find out more about Sam Hyde here.