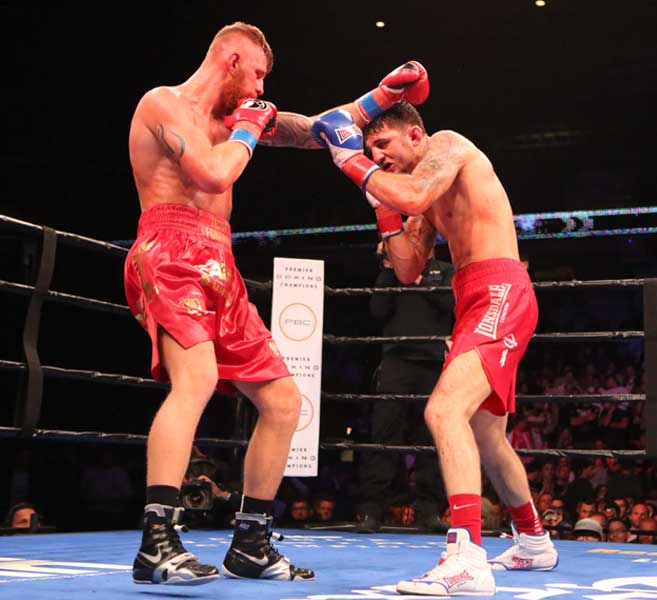 Nathan Cleverly came out of his tough fight against Poland’s Andrzej Fonfara in Chicago with plenty of praise for a great effort in what was a fantastic all action battle on Friday, but non were more applauding of his efforts than that of his Cefn Fforest man’s opponent.

The 28-year-old Cleverly a former world champion suffered a broken nose midway through the fight, and the impressive Fonfara took the unanimous verdict of the judges. The Chicago-based boxer was given the verdict by all three judges with csards that read, 115-113 from one judge and by 116-112 from two.

“Cleverly has a great chin. He’s a great fighter. He was taking a lot of punches and not breaking down. He still wanted to go forward and fight. He believed he could win until the very end,” Fonfara said.

“I thought I would knock him out before the fight, but during the fight I realized he has great defense. I had no idea he could take so many punches and still be in the fight. I realized it would be very hard to knock him out. I respect him very much.

“It was not the toughest fight of my career, but I’m happy because it was a hard 12 rounds. I got the feeling I broke his nose around the seventh or eighth round. After taking so many hard punches I felt he was wearing down.

“I was positive I won before they read the decision. The last couple rounds there was no question who was the better fighter. He was still throwing punches, but I was blocking them and hitting him very hard.”

The fight, for the WBC International light heavyweight title, was seen by both fighters as a stepping stone to bigger things, Fonfara will go on to get his chance of world glory for sure, he deserves it. But Cleverly although defeat was hard to take he shown heart, bravery and world class skill to make for a very entertaining encounter and can come again.