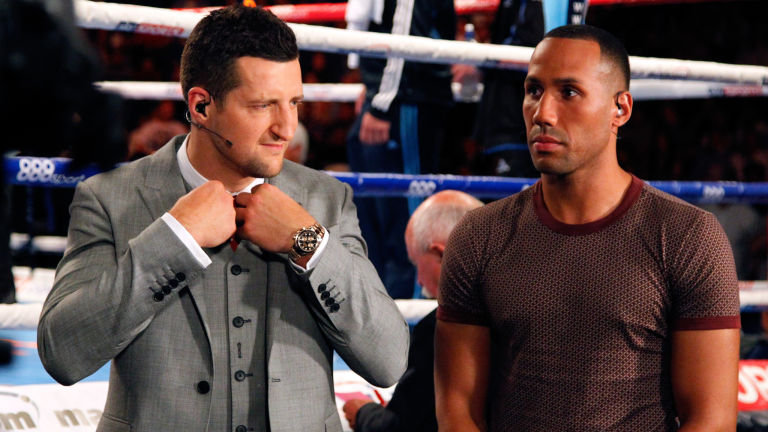 DeGale tells Froch “There’s no point in coming back and fighting me, trust me.”

IBF world champion, James DeGale, has told Carl Froch to think again about coming out of retirement to face him in the ring because he is an “old man who is old news.”

“The Cobra” recently brought up the idea of comeback talk and claimed he would give IBF super-middleweight champion DeGale a “pasting” if they ever did fight.

The four-time world champion later put the record straight in his column for Sky Sports, insisting he was happily retired – unless a fight emerged to reignite his desire.

DeGale, who claimed a unanimous decision over Andre Dirrell on the road out in America in May to become the first Briton to win Olympic gold and a world crown, also believes boxer-turned-pundit Froch should serioulsly scrap any thoughts of a comeback.

DeGale has been quoted as saying “I think it’s just a bit of publicity for him saying he will come back and give me a pasting,”

“If I was him, I would just stay retired and chill. He’s achieved a lot in boxing, he’s earned a lot of money… just sit back and relax.

“There’s no point in coming back and fighting me, trust me.”

DeGale who will be travelling on the road again will make his first defence against an ex Froch opponent, the Olympic gold medallist whos the proud owner of Froch’s old IBF 12 stone title will take on the 38-year-old’s former victim Lucian Bute in Canada next weekend.

The North West Londoner is confident of victory and warned Bute, whose undefeated run of 30 straight wins was ended by Froch in May 2012, he is “feeling like a monster”.

“He is still a very good fighter, a dangerous fighter. He was a world champion for a long, long time, but I just think I’m too young, too fresh.

“I’ve just come off a fantastic win, I’m just flying at the moment even in the gym, sparring, I’m just feeling like a monster and it doesn’t matter who’s in front of me – I’m going to retain my title and look good.”

Romanian-born Bute who has never lost a bout in his home surroundings will be fighting in front of his adopted fans in Quebec City but “Chunky” believes his performance will win over the home support.

“It doesn’t bother me, because at the end of the day they will probably be cheering me out because I put on such a great performance.”

Watch James DeGale defend his IBF super-middleweight title against Lucian Bute live from Quebec City on Sky Sports 1 from 3:00am on November 29