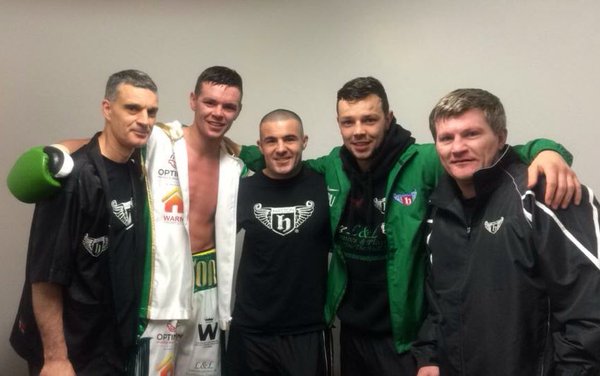 SONNY UPTON: SOUTHPAW TOMS WILL BRING OUT THE BEST OF ME

The Ricky Hatton-trained prospect tops the bill for the first time at the historic York Hall in Bethnal Green and is fully aware of his opponent after seeing him box at the same venue many years ago.

“I boxed all over England and Ireland and went to loads of amateur shows when I was a kid, but the first ever pro show I went to was at York Hall and Ryan Toms was on it,” Upton recalled.

“He was defending the Southern Area title that night against Steve O’Meara and he ended up getting knocked out in the first round.

“I never thought that one day I’d be getting that same ring against him, but boxing’s a funny sport and things like this happen.

“Although he lost quickly that night, I know he’s going to be a test on the night and I can’t let first impressions dictate the way I fight him.

“He’s been a champion and he’s beaten some really good fighters so I’ll have to bring my A game to beat him. He’s a southpaw as well, which most fighters find difficult, but I love facing southpaws because they bring out the best in me.”

While a victory this weekend will push the 26-year-old towards his first professional title, it will also underline the great strides he has made in his life since dedicating himself to boxing.

“Six years ago I didn’t know where my life was heading,” he revealed. “I was hanging around with the wrong crowd and getting into trouble.

“Boxing has helped me get away from all that. It’s helped sort me out and given me the focus to really make something of myself.

“Now I’m topping a bill for the first time and it shows to people what you can achieve if you put the work in and avoid the distractions.

“This Saturday is a big thing for me and for my family. Along with Ricky, they spur me on. They still believed me when I was on the wrong path and now I’m determined to repay them.”