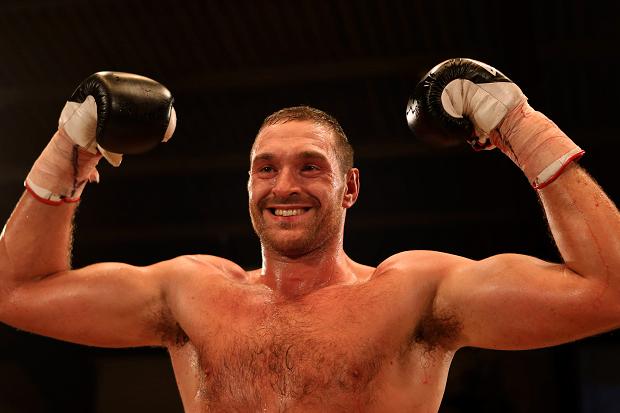 Tyson Fury The New Heavyweight Champion of the World

In something of a tactical affair Tyson Fury outpointed Wladimir Klitschko to win the heavyweight championship of the world in Dusseldorf Germany on Saturday night.

It was a tight encounter to start with for the first few rounds with each trying to work the other one out. Klitschko took the front foot, but he found it hard to get inside Fury who had found a range that he was comfortable with. 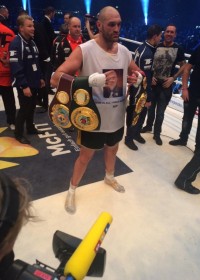 Tyson Fury – heavyweight champion of the world by @ringtoneboxing 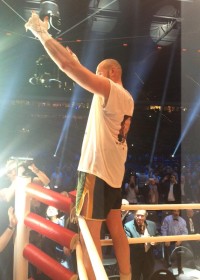 Tyson Fury – heavyweight champion of the world by @ringtoneboxing

Fury turned southpaw in round 3 for a couple of minutes to try and confuse Klitschko. the challenger was taking the rounds even though no clean punches were being landed by either, it was Fury being the busier, while The Ukranian found it hard to land clean. Fury’s movement made it hard for the champion.

Klitschko sustained a cut under his left eye in round 5 after an accidental clash of heads. Fury was almost constantly talking to Klitschko, taunting the long reigning champion.

Relaxed, Fury was ahead as the fight entered the midway point, he was growing in stature and began to settle down and try to plant his feet more.

Fury grew in confidence more and more, at times putting his hands behind his back, although the talking had calmed down and he became more focussed. The crowd tried to rally the champion who tried to up his game but Fury just always seemed in control and almost like he was the champion and Klitschko the challenger.

In the 9th round both landed their most telling shots, Klitschko landed a flush right on Fury and Fury and left right combination., both rode the shots. Fury continued to pump out his jab and move, making angles all the time and making it difficult for the champion, who seemed to be just loading up the right hand all the time.

It wasn’t a classic fight by any means but such was the tension, you couldn’t take your eye off it, knowing one shot at anytime could end it. Klitschko picked up another cut on the right eye in the 11th and he was now looking like a champion in trouble, battered and bruised. Fury then landed a sweet left hook that shook Klitschko. Fury was deducted a point in the round after consistent rabbit punching.

Fury came out fast looking to take Klitschko out in the final round and the fight heated up, they both went for it. It was on the edge of the seat action and Klitschko put the pressure on. As Fury went to pull his shorts up, Klitschko took advantage and landed a big right hand on Fury that rattled the Mancunian. Klitschko went for it. Fury was looking tired but fought to the end.

At the final bell it was a hard choice, opinions split, would the point deduction make the difference, how would the judges see it? Everyone held their breath.

British boxing has a new heavyweight champion of the world!!!

“I always said what I’d do and I’ve delivered tonight. I didn’t have this confidence for nothing.I knew I could come here and upset the apple cart.” said Fury after the fight.

“I knew all along I could win the fight. Wladimir knew, his full team knew tonight. I saw in his eyes he was going to lose the fight and he saw the new, hungry champion in me.

“I never took my eyes off him during the stare-off. I wasn’t fazed by the crowd or nothing because I knew I was going to be the new heavyweight champion of the world.

“God gave me the ability to do like I’ve done and I want him to thank him for that. With God, anything is possible.” added the new champion. 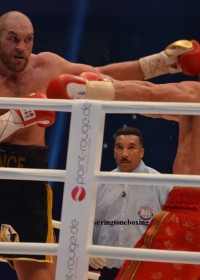 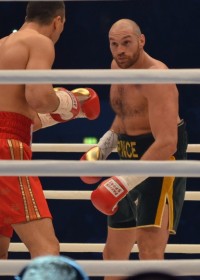 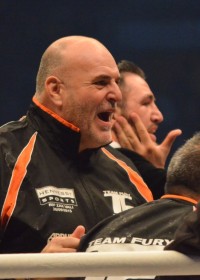 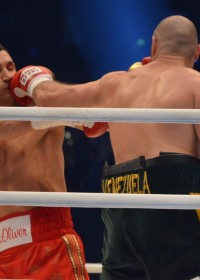 It was 39 year old Klitschko’s first defeat in 11 years. The fight contract had a rematch clause inserted that should Fury win, he must make the first defence against Klitschko in an immediate rematch. It appears the Ukrainian former champion would welcome a return and so that fight will go ahead if that’s the case.

Another option for WBA, IBF and WBO undisputed champion Fury would be a fight with the man who holds the only heavyweight belt he doesn’t own, WBC champion Deontay Wilder. American Wilder is unbeaten in 35 fights, with 34 KO’s and at 6’9″ a formidable foe for Fury to contemplate. What a matchup that would be!

Another option would be the fight that never happened! Yes a third try at matching these two is a possibility neither boxer has ruled out in the future.

For now Tyson can enjoy his victory, enjoy Christmas and new year and then paln for 2016 as defending heavyweight champion, there will be many challengers knocking on his door.

British boxing is currently witnessing an unprecedented period of success with a resume that boasts a 11 outstanding world champions all at the top of their game.

Manchester’s Tyson Fury was the latest name added to that distinguished list that includes;

The future of British boxing looks very bright. Read more on this…