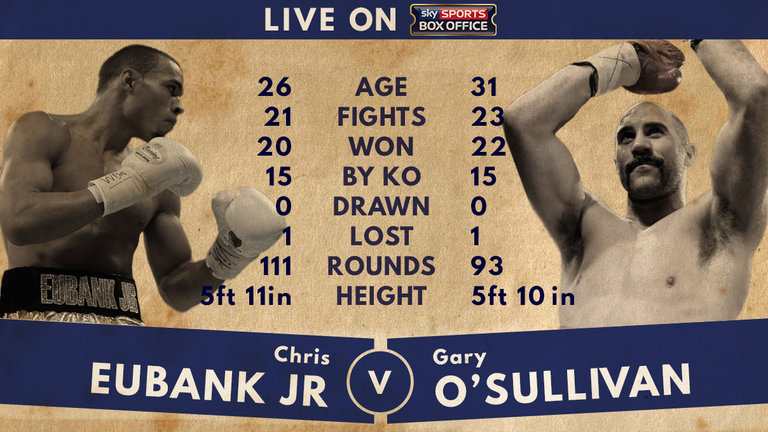 WBO champion Andy Lee believes Chris Eubank Jr’s domestic clash with Spike O’Sullivan could steal the light at London’s O2 Arena come Saturday with it being the fight of the night.

The WBA title eliminator for a shot at Danny Jacobs title features as chief support on the undercard of Anthony Joshua’s heavyweight grudge match with Dillian Whyte.

Irishman Lee, who defends his title against Billy Joe Saunders in Manchester next weekend has been working with Eubank Jr in the build-up to Saturday’s contest, not to forget Eubank Jr is a former opponent of Saunders, who he lost to on points last year.

Speaking on affairs Lee has been quoted as saying “We have trained together. We shared the gym together and share the same trainer in Adam Booth.

“I know Spike O’Sullivan from our amateur days in Ireland and they’re definitely contenders and on the fringes at the moment. The winner of this fight will be propelled to a serious challenger.

“It’s a very close fight. You could see why both guys could win. Spike O’Sullivan has a big punc”Eubank also has a big punch but has a lot of skill, finesse and explosiveness as well. It has the potential to be the fight of the night on Saturday.

“It’s a 50/50 fight. I’m looking forward to watching it and the winner’s a real challenger for one of the bigger belts.

“I have a good insight into the fight. I think it’s a close fight but I’d favour Eubank Jr to win just because I think he has a little bit more pedigree.”

The man Lee takes on at the Manchester Arena on December 19 is another who catches the eye, with Saunders who is currently undefeated and having beaten both Eubank Jr and O’Sullivan in former contests.